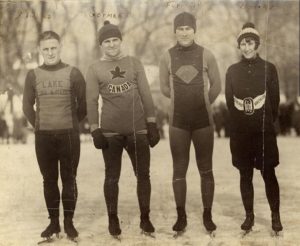 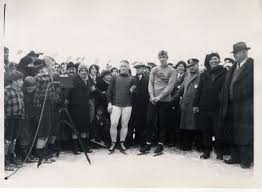 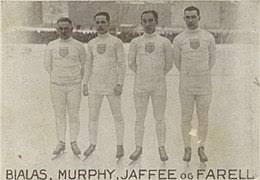 Valentine was born January 10, 1903 and died March 9, 1965. During his life he achieved the title of International Champion with his peak being in 1928. He was inducted into the National Speedskating Hall of Fame on May 11, 1963 in Chicago, Illinois.

Valentine Bialas had a very long speed skating career that came to a tragic end. Never a national champion, his biggest championship was the International Speed Skating title in Detroit in 1926. He also later established an American record for two miles, with a time of 5:35.5 set in 1929 in Lake Placid. After competing in three Winter Olympics (’24, ’28, ’32), Bialas continued to compete and was being considered for the 1936 Winter Olympic team as well. But after returning from a meet while training for the 1936 Olympics, he was involved in a serious accident when his car was struck by a train, and he lost a leg from the injury. After being fitted with a prosthesis, he continued to skate recreationally and also played in city tennis tournaments, winning the indoor doubles title from 1947 through 1950 with teammate Jules Daniels. Bialas was Utica commissioner of parks and recreation when he died at 61 in 1965. He was inducted into the US Speed Skating Hall of Fame in 1963. In his hometown of Utica, New York, the Val Bialas Ski Center is named in his honor.