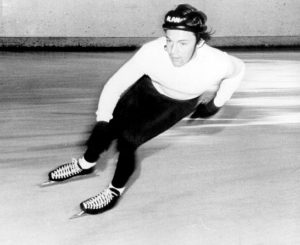 He was the National Indoor Champion in 1974 and 1976 as a senior and won the first World Short Track Competition in 1976, in Champaign, Illinois. He went on to win the gold medal in the 500m at the ISU Short Track Championships in 1978, placing him 3rd overall. Alan was inducted into the National Speedskating Hall of Fame on May 19, 1990 in Colorado Springs, Colorado.

Article in The Corsair April 24, 1974 “He’s World Champ but Nobody Here Knows It”

If Alan Rattray had been born in Austria, he would be a superstar. But Rattray, a world-record holding speed skater, lives in Santa Monica and his exploits on the ice are noticed as much as the Coke stains and hot dog wrappers on the snack bar patio. When Rattray was steadying his nerves at the starting blocks of the National Indoor Speed Skating finals in Chicago last month, most people were adjusting the tint on a televised basketball game. And when he grabbed first place, he was not given as much as an inch-long story next to duck shooting on the sports pages of America. “I skate for myself,” Rattray said. “Nobody knows about my accomplishments except for the other speed skaters and a small group of spectators. I never get written up and I don’t even tell others about what I’ve done. I used to, but people would say, ‘That guy has a big head,’ so I stopped.” The sun was making shiny streaks through his long red hair as he spoke softly. His boyish grin accentuates a pair of sparse sideburns. Freckles explode across his face.

He continued, “I’ve been skating since I was nine years old. When I first saw a speed skating exhibition it really blew my mind. All those bodies zipping around the ice. I knew right then what I wanted to do.” Since Rattray strapped on a pair of speed skates for the now defunct Culver City Speed Skating Club, he has won a roomful of trophies. In addition to his victory at the Nationals in March Rattray holds the world record in the indoor 440–yard race with a 37.5 seconds mark. He hopes to make the Olympic team in 1976. “In the Olympics,” he said “I’ll have to skate outdoors, there are no indoor events. I’m going to train on the East Coast or in Wisconsin for a few months. I’m told it’s completely different from indoor skating. I’m pretty confident that I’ll succeed. Hopefully, I’ll be able, financially to train in Europe. I’d like to make it to Germany with my coach, Jim Minami.” Wearing a Hawaiian-style T-shirt and a faded pair of blue jeans, the Windsor, Canadian born 5-foot-9 athlete looked around at the people smiling in the sunshine of a bright Thursday afternoon.

Scouts wave bundles of scholarships before the noses of athletes in popular sports who have achieved far less than Rattray who now must skimp and save the funds necessary to represent the United States in the Olympics. “Each year,” he said, “I have to get about $1,000 together to make the trip to the East Coast to race in the big championships. This year I couldn’t race after the Nationals because of illness. My father drove our VW camper up towards Windsor for a holiday of sorts. I was so sick I thought I was gonna die. I had to fly back here early. I’m still feeling it now.” The illness turned out to be bronchitis. Rattray has a job which he terms “just great” with Component Research Co. It is helping him toward his planned career as a draftsman, his major.

But if his boss is sympathetic when he has to take leaves of absence, his teachers probably aren’t. “The teachers here don’t care one way or the other. The test grades are all that’s important,” he declared. Rattray now competes with the Burbank Speed Skating Club. He tries to skate three times a week with two hour workouts. “Most of speed skating can’t be taught. You just have to move your feet as fast as they can go. You’re either born with it or you’re not,” he said. In a speed skating meet you have to skate more than one event, going both short distance and long distance. In his National’s triumph, Rattray needed points up until the final race to win. “I usually win, but once in a while, I like to lose,” he smiled. That seems comparable to George Allen exhorting his Redskins to “take it easy and let the opposition win once in a while.” Rattray said, “Things would get too monotonous if all I had were firsts. When you lose, it makes you work towards a goal. If I won all the time, what would I have to look forward to or gain satisfaction from?”

Rattray said his father and mother are his biggest fans, but “they don’t pressure me. They’re really cool about it. ; “That’s not true among many of the parents of speed skaters. It’s ridiculous the amount of politics in this sport.” At the Olympics Rattray hopes to compete in the 500-meter race. If he gets there, he will not arrive unscathed. Those who think of speed skating as a non-contact sport should have seen the mouse that found a home in Rattray’s eye in the finals of the speed skating championships at Paramount’s Iceland or look closely at the knees which are usually swollen to twice their size. “Skating is my life. I love it. There’s something beautiful about whipping around a corner at top speed and feeling the centrifugal force tugging at you. It’s something more than the competition.” As he spoke, his eyes glistened as if he had the feel of ice beneath his feet. He was interrupted by a lovely dark haired girl who knew him from a class she has with him. After a quick “hi” and a seat next to him, she listened to the conversation long enough to ask the question, “Do you skate, Alan?”