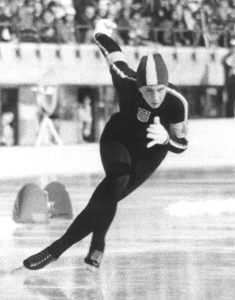 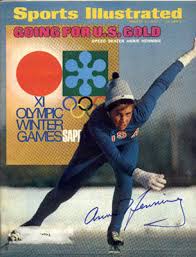 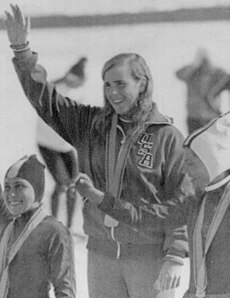 Anne was born September 6, 1955. She started skating in 1964 and was National Short Track Champion as a midget by 1967, continuing her success by winning the Juvenile National Long Track Championship in 1969. She switched to metric skating in 1970 and was a member of the World Team.  At Helsinki in 1971, she won the 500m race at the World Championship. That same year at the World Sprint Championship in Inzell in 1971, she won both 500m events. At Davos that year she set World records of 42.5 and 1:27.3 at 500m and 1000m. She concluded her career in 1972 at the Sapporo Games in Japan, by winning the gold in the 500m and a bronze in the 1000m. She was inducted in to the National Speedskating Hall of Fame on May 16, 1992 in St. Louis, Missouri.

Although only 16, Anne Henning was a favorite to win the two shortest speed skating races at the 1972 Olympics. By then she had been second in the World Championships at all-around. She had also set three official and two unofficial world records in the 500, and one official world record in the 1,000. In the 1972 Olympic 500, Anne Henning skated a fine time, despite being interfered with by her pair partner on the cross-over. She was offered a re-skate, and took the opportunity and took the Gold. It was probably a mistake, for although she bettered her time, her initial 500 time would also have taken the gold medal. The next day in the 1,000, she could manage only a bronze. She described her legs as being “dead”.  At the end of the season, Henning retired from speed skating, still only aged 16. Later, Anne Henning became a teacher in Englewood, Colorado.

Prohibited from competition in the local Little League program, Anne Henning set her sights on becoming the fastest woman skater in the world. Fortunately, her hometown of North-brook, Illinois, boasted an excellent speed-skating program, due mostly to the efforts of Ed Rudolph, who was the park commissioner and a world-class speed-skating coach. (By 1975, Northbrook was known as the “Speed Capital of the World” and had trained twenty-nine national champions, eight world team members, and ten Olympic team members, of which eight were women.) Rudolph first saw Henning skate when she was ten and recognized her talent immediately. “I saw nothing but gold medals dancing before my eyes,” he later said.

With her parents’ approval, Henning began training with Rudolph and, for the next six years, devoted her life to skating. It was always a struggle, and she often wanted to quit. “For a while I wouldn’t go out to practice,” she recalled. “Then my parents and Mr. Rudolph sat down with me and let me see how close I was.” At age 12, she won the U.S. National championship in both the 500 and 1,000 meters. At 15, after setting speed-skating records in both the women’s 500 and 1,000 meters, she began to prepare for the 1972 Winter Olympic Games at Sapporo, Japan.