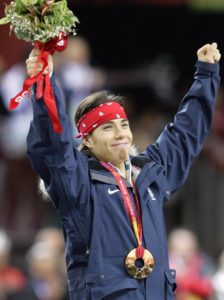 Inducted May 16, 2016
According to Apolo’s two autobiographies, as well as numerous press interviews, he fell in love with short track speedskating while watching the 1994 Lillehammer winter Olympics on TV with his dad. He enjoyed watching the action-packed events featuring athletes that resembled superheroes. He took his first turns on-ice later that year. He began training full-time in 1996 at the age of 13, becoming the youngest skater ever to be accepted to the US Olympic Training Center program in Lake Placid. In 1997 he became the youngest US national champion in history at the age of 14. He struggled with his dedication, focus, and commitment for the next year and failed to make the 1998 Olympic team but rededicated himself to the sport after famously spending a week of soul-searching alone in a secluded cabin. After his re-focus he became the youngest skater ever to win a World Cup race at the age of 16, as well as the first US skater to win the overall Junior World Championships in 1999. He is an eleven time US National Champion and the 2008 World Champion (the first and only American male World Champion since Alan Rattray in 1976). In 2002 he made his first of three consecutive Olympic teams, eventually becoming the most-decorated US Winter Olympic in history with eight medals. He also holds the record among American short track athletes for most World Cup medals (an amazing 108 medal, 57 of them gold) and World Championships medals (15 total, 6 of them gold). He also set American records in the 3000m (4:32:975 in 2003) and, with teammates Anthony Lobello, Travis Jayner, and Jeff Simon, the 5000m relay (6:39.019 in 2008). All the while maintaining exemplary character on and off the ice and serving as a good role model for kids and adults alike. 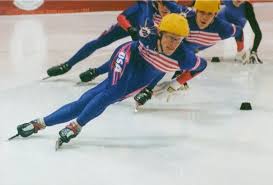 Apolo Ohno is the face of short track speedskating in the US. He is the most accomplished and most recognizable short track athlete in US history, male or female. He’s inspired many young skaters to try the sport, most notably JR Celski. The American viewing public fell in love with both Apolo and the sport of short track in 2002 and he’s helped to maintain the visibility of the sport even after retirement by serving as a well-informed commentator for NBC Sports during national championships, world meets, and the Olympics. He also launched the annual Apolo Ohno Invitational in 2014, showcasing the sport in a hip, fun way for the public and offering price money for the athletes in order to supplement their training. Apolo has always treated his teammates and opponents with respect. He also stresses the importance of accepting loss with the same class and grace as accepting victory, and of handling setbacks positively. He teaches that it’s OK to make mistakes; it’s how you react to them that counts. Treat them like learning opportunities. He also remains humble, down-to-earth, and genuine in spite of all the successes he’s had over the years; believing that in sports and life in general, it’s important to value the journey and the preparation more than the end result, and to give 110% to this journey in order to be able to accept whatever the end result is with zero regrets.

Accomplishments in Other Sports: Before he discovered short track, Apolo was an accomplished swimmer, winning the Washington State Junior Championship in breaststroke at age 12. Outside of speedskating Apolo has always maintained an active and healthy lifestyle, cross-training extensively with John Schaeffer’s Winning Factor program through much of his on-ice career as well as “training for life” after retiring from the sport. After his retirement from the sport following the 2010 Olympics, Apolo has continued to push himself physically. He turned a body trained for short, explosive bursts of speed into an efficient distance-running machine. He ran the 2011 NYC Marathon in 3:25:41 and conquered the 2014 Ironman Triathalon with a sub-10 hour finish of 9:52:57! His intense dedication to training and impressive Ironman finish earned him Triathlete Magazine’s Most Legit Celeb Performance that year as well as the respect of the triathlon community.

Non-sports Interest and Accomplishments: Over the years Apolo has lent his face and reputation to product endorsements such as McDonald’s, LandRoller, Nike, Omega watches, Vicks NyQuil, Coca-Cola, Subway, and Got Chocolate Milk, among others. He’s pursued avenues in broadcasting and entertainment: competing twice in “Dancing with the Stars” (winning season 4 in 2007 with partner Julianne Hough and finishing 5th in the All-Stars season with partner Karina Smirnoff); hosting a revival of the game show “Minute to Win It”; appearing as a guest star or in promos for TV programs such as “Hollywood Squares”, “The Biggest Loser” (twice), “Suits, “Men at Work”, “Best Time Ever with Neil Patrick Harris”, and an upcoming episode of “The People’s Couch”; appearing in the SciFi movie “Tasmanian Devils” with Danica McKellar; serving as presenter or correspondent for awards shoes such as the Nickelodeon Kids Choice Awards and Teen Choice Awards; appearing as a guest on numerous talk shows; and as broadcast correspondent for the summer and winter Olympics starting in 2012 and 2014, respectively. Having studied marketing and international business at University of Colorado (Colorado Springs), Apolo has also successfully adapted to the business world. In 2015 Apolo and business partner Rod Jao launched a nutraceutical company called Allysian Sciences, pairing top-rate nutritional supplement products with training modules in order to optimize brain performance and physical health. Apolo is also an avid world traveler, both for business and pleasure, and is inspired by meeting new people and hearing their personal stores. He shares his adventures with his fans on Instagram, stressing the value of experiences over material possessions. Apolo has also shared his journey in two inspiring autobiographies, 2002’s A Journey and 2010’s New York Times best-seller Zero Regrets.

Community Service and Mentorship: Apolo has given back to the community in many ways over the years through donations, appearances, and speeches for charity groups (Youth Haven, Heartland Heroes, Nikkei concerns, Ronald McDonald House, Seattle Children’s Hospital, Gap RED, among others). He is an enthusiastic supporter of Special Olympics as a Global Ambassador, helping to mentor Special Olympics short track athletes. Knowing first-hand how critical it is to provide middle school age children with positive influences in order to help them choose the right path in life, he inspires children to make positive choices through program’s such as the Century Council’s Ask, Listen, Learn program, which teaches kids to say no to underage drinking and drugs. In 2011, he was honored as one of the Century Council’s 20 People to Watch, thanks to his dedication to the program. Another way he mentored kids was through Math Moves U in 2006, which encouraged kids to embrace math and helped them with homework. He also mentored his short track teammates as team captain for years, providing support and encouragement to the up-and-coming skaters. The intent of his autobiography Zero Regrets is to share his story in a way to be inspirational and motivating to readers in all walks of life. He travels all over the US and the world as a motivational speaker, inspiring and mentoring businesses, students, and the public. In 2007 he was inducted into the Asian American Hall of Fame as a positive role model for Asian Americans.

From the US Speedskating announcement April 2016:
KEARNS, Utah — Eight-time Olympic medalist Apolo Ohno is being inducted into the U.S. Speedskating Hall of Fame next month.

Ohno is the most decorated American in Winter Olympics history, having earned his medals in three games during his career.

He says he feels “proud, blessed and humbled” about the honor announced Monday.

The ceremony will be May 13 in Park City, Utah.

U.S. Speedskating President Mike Plant says Ohno is one of the “great ambassadors” of the sport and credits him with raising speedskating’s profile off the ice.