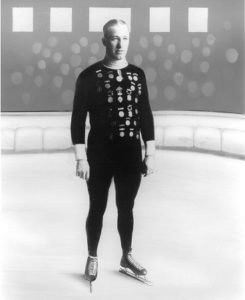 From Chicago Tribune:
When Speedskating Was Cool
Feb. 14, 2014

The first international skating competition was held in Chicago in 1918, the Tribune reported, and it came as skating was booming in popularity. Speedskating was a relatively young sport — the first world championship was organized in 1893 — but was already drawing large crowds in Chicago for local races as early as 1904. More than 15,000 people enjoyed an outdoor race in January 1915 on the Garfield Park lagoon. About 30,000 saw Arthur Staff win the inaugural Tribune-sponsored Silver Skates tournament at Humboldt Park lagoon in January 1917, according to the Tribune. The Silver Skates Derbies, a Tribune sponsored race, grew rapidly during this time. A boys division was added in 1919. Women first raced in 1921, and a girls division followed in 1922. The Silver Skates competition continues today.