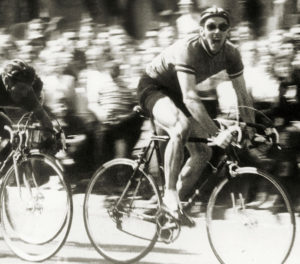 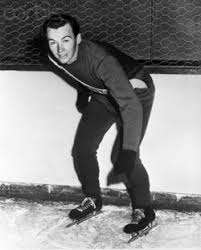 Arthur was born October 23, 1931 and passed away September 16, 1958 from injuries suffered in an auto accident. He was the first athlete to compete in both the Winter and Summer Olympics in the same year. He was a habitual cyclist and was a member of the US Speedskating team in the Olympic Games in 1956. Arthur made the Winter Olympic team for speed skating despite not being able to compete in the Eastern Olympic Trials because of a sprained knee he sustained while training for the event. The USOC granted him the waiver to the final trials because he had won 9 of 11 national-level events in 1954-55. He also won the title of North American Outdoor Champion. He was nominated to the National Speedskating Hall of Fame on May 24, 1970 in Buffalo, New York. 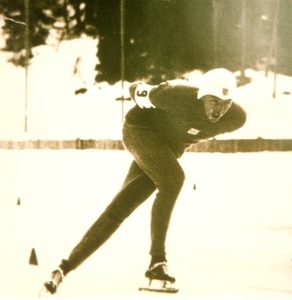 (Compiled by Rich Garven Sources: Terry Longsjo-Brackett; “Hearts of Lions: The History of American Bicycle Racing” by Peter Nye; Fitchburg Access Television; and on the Web at longsjo.com and active.com.)

Only 18 athletes are believed to have competed in both the Summer and Winter Olympics, eight of them from the United States.

Mr. Longsjo was 12 years old when he first attached long blades to the bottom of his boots and took up speedskating. Nine years later, he was the North American outdoor champion and not long after that was an Olympian, at 24 the youngest speedskater on the team.

Intent on becoming the best skater he could be, Mr. Longsjo made cycling the centerpiece of his out-of-winter training regimen. He would quickly become a better biker than skater.

“Don’t ask me which one he liked the most, (although) I think at the end he really liked cycling more than speedskating,” said Terry Longsjo-Brackett, who attended a prom at Becker Junior College with Art on a blind date and married him in February 1957. (Terry, 76, remarried three years ago and still resides in Massachusetts.) Mr. Longsjo won the first bicycle race he entered, the Massachusetts state championship in 1953. He did so with inferior equipment and after having ridden his bike from his home in Fitchburg to the racing venue in Westboro. Long rides were commonplace for Mr. Longsjo. He regularly took part in a 180-mile training excursion that took him through four states and ended with a 2,000-foot climb to the summit of Mount Wachusett.

It took two 116-mile road races over a span of three days to determine the five cyclists who would make the Olympic team in 1956. Mr. Longsjo was nearly derailed by mechanical problems, but overcame them to grab the final spot.

While he succeeded in making both Olympic teams, Mr. Longsjo did not have the success he hoped for at either Games. He overcame a knee injury to win the 5,000-meter race at the U.S. speedskating trials, but was floored by a pre-race illness that led to his finishing 40th at the Winter Games in Italy.

Although road racing was his forte, Mr. Longsjo was placed in the 4,000-meter team pursuit on the track at the Summer Games in Australia. The unfamiliar foursome didn’t advance out of the preliminary heats.

Mr. Longsjo was sleeping while his friend drove home the morning after the race. They had just left Canada behind when a bee distracted the driver, causing the car to crash. Mr. Longsjo died later that evening as a result of a fractured skull and internal injuries.

“One thing about Art that he had, that I really loved him for, was the fact that if he lost a race it’s because that other man was better than he was. … There was never any bitterness from Art. That was one of his greatest qualities.” — Terry Longsjo-Brackett

Although a tremendous athlete, Mr. Longsjo failed his physical when he tried to enlist in the Air Force in the mid-1950s. It seems he had a pinhole between ventricles that produced a “blowing” heart murmur.

The Tour of Somerville in New Jersey, which Mr. Longsjo won in 1958, is recognized as the oldest cycling race still in existence in the United States. Next is the Fitchburg Longsjo Classic, which was first held in 1960 as a tribute to one of the city’s favorite sons.