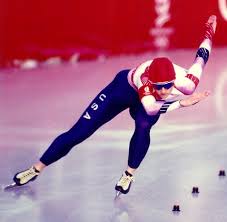 Bonnie was born March 18, 1964. Perhaps one of the most decorated and honored female athletes of the twentieth century, Bonnie’s accomplishments are extensive. She was a member of four U.S. Olympic Speed Skating Teams, winner of five Olympic gold medals between 1988 and 1994, became World Sprint Champion in 1989, 1994, and 1995, won nineteen World Sprint Medals, and won World Short Track Champion in 1986.

Bonne Blair began competing as a speed skater when she was four years old.
At the 1988 Olympic Games in Calgary, she watched as Christa Rothenburger broke the world record at 500m. Then she went out and bettered Rothenburger’s time by two hundredths of a second to win her first gold medal. Blair also earned a bronze at 1,000m.
In 1992 Bonnie defended her Olympic 500m championship and then took a third career gold medal at 1,000m. Her total margin of victory for these three wins was only 22 hundredths of a second.
Two years later, Blair took part in her third Olympic Games. She repeated her victories at both 500m and 1,000m, but this time she won clearly, by 38 hundredths of a second at 500m and 1.38 seconds at 1,000m. The latter was the largest margin in the event’s history. 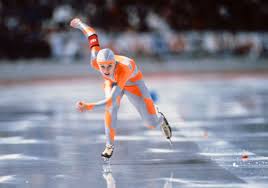 New York Times – Feb 24, 1988
The New York Times Archives
SHE’S already the Mary Lou Retton and more of these XV Olympic Winter Games. And now Bonnie Blair, the lady leprechaun who seems to have stepped off the drawing board of a Disney artist, has the golden opportunity to win what no American female speed skater ever has: two Olympic gold medals. But she’s too smart to talk about another gold, only about the possibility of a silver or a bronze, or both.

If the 500-meter gold medalist were to earn a silver or a bronze at either 1,000 meters on Friday night or 1,500 meters on Saturday night, she would equal Sheila Young’s sweep of a gold, a silver and a bronze in 1976 at Innsbruck, Austria. Of all the American female speed skaters in all the Olympics, only Young in 1976 and Anne Henning and Diane Holum in 1972 had ever won a gold medal until Bonnie Blair set a world record of 39.10 seconds after Christa Rothenburger of East German had set a world record of 39.12.

”Two-one hundredths of a second,” Blair said with a smile. ”That’s not very much.”

By those 10 1/2 inches, 23-year-old Bonnie Blair did what Mary Lou Retton didn’t have the chance to do in gymnastics at the 1984 Summer Games in Los Angeles: defeat the world’s best. Retton’s all-round gold medal was forever tarnished by the absence of the Russian gymnasts. But at the indoor Olympic Oval, the 5-foot-5-inch, 130-pound baby of the Blairs’ six children outskated three East Germans, including Karin Enke Kania, the defending Olympic champion at 1,000 and 1,500 meters.

”I’ve never skated against Karin head to head,” Blair said. ”When somebody good is there, you’re always chasing somebody and that’s better for me. But the time tells what happens.” THE time Monday night told the world all it had to know about what makes Bonnie skate. Even when all she had to eat before her world record was a peanut-butter-and-jelly sandwich. But she has been skating ever since she was so small that she had to wear her shoes inside her skates. The day she was born, her mother was dropped off at the hospital in Cornwall, N.Y., by her father, who then drove to a speed-skating meet where their five other children were competing.

”The Blair family,” the meet announcer would intone, ”has just added another skater.”

Her mother, Eleanor, had grown up skating in Flushing, Queens, on the frozen pond of a little park. ”Just a fun thing,” her mother recalled. ”My husband had skated, too, so we started our children skating.” Bonnie was 2 years old when Charley Blair, a civil engineer, moved the family to Champaign, Ill.

”Our oldest daughters, Mary and Susie, skated at the University of Illinois rink,” Eleanor Blair said. ”The coach there told us they should be speed skaters. When we went back to New York for Christmas that year, we looked all over for white speed skates, not knowing that nobody makes white speed skates. So in Illinois we had to borrow black speed skates.”

In those borrowed skates, Bonnie began winning medals. And two years before she skated in the 1984 Olympics, the Champaign Police Department began sponsoring her travels.

”One time,” Bonnie recalled with a laugh, ”my car got hit in a parking lot. When the policeman came, he told me, ‘I know you, I’m the one who writes the checks for you.’ They wound up fining the guy who hit my car and I got my money just like that.” ANOTHER sponsor is Jack Sikma, the Milwaukee Bucks’ basketball player who was a college fraternity brother of Bonnie’s brother, Rob, a Dallas oil-pipeline salesman who has been under treatment for a brain tumor for more than a year.

”Everything’s been going great for Rob,” Bonnie said. ”The tumor hasn’t changed at all. He’s fine. But the best part about my winning the gold medal wasn’t just having Rob here, it was having my whole family here.”

About 20 members and friends of the Blair family were there, many of them wearing white jackets with ”Bonnie Blair Speed Skating” in blue on the back.

”My mom and dad were there,” Bonnie said. ”My brother Chuck, my sister Mary and her husband Ken and their four children, my sister Susie, who’s an airline stewardess, and a lot of her friends, my brother Rob and his wife Cindy and their 4-month-old baby, my sister Angela, my Uncle Lenny, and a lot of my brothers’ and sisters’ friends.”

After the medal ceremony, the Blair family and friends gathered at Billy Miner’s, a local restaurant.

”I don’t know where all the champagne came from,” her mother would say, ”but I had some.”

Bonnie Blair was there, celebrating with her boyfriend, Dave Silk, a speed skater from Butte, Mont., who was not involved in the controversy that swirled through the United States men’s team in the weeks before the Olympics.

”I had to block that controversy out,” she said. ”The guys had their problems, and I had my job to do. But what happened to Dan Jansen, losing his sister to leukemia and then falling twice, you couldn’t help but feel for him.”

After the World Cup events in Europe next month, Blair plans to attend college.

”I’ve taken some correspondence courses at Parkland Junior College,” she said. ”But now I want to go to a four-year college, get a degree in physical education with a minor in business, get married someday and have kids.”

Before all that, of course, Bonnie Blair has an opportunity to win two more gold medals. But any combination of silver and bronze will do.