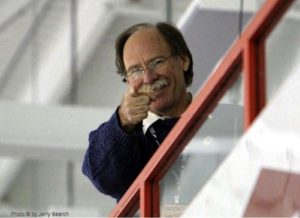 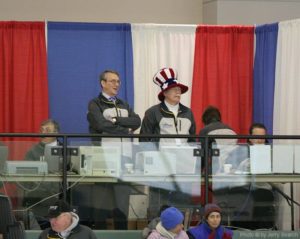 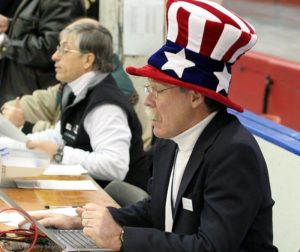 Brian wearing his distinctive “Cat in the Hat” hat.

Inducted June 1, 2018
Brian and Carol Westover started their son Tom, skating in Roseville in 1988. Their other son James started in 1991. Little did they know this would turn into a lifelong passion for Brian. His son James only skated a few years but still to this day helps with all the computers and wiring that need to be done to make competitions run smoothly in Roseville. In Roseville we all knew him with his Dr. Seuss hat and a smile. Brian passed away April, 3rd, 2014 at the age of 59. His contribution to the sport of speed skating will go on for years and years.

Brian started his volunteering in the timing room and knew there must be a better way to score and record competitions. Having graduated with highest honors from University of Minnesota in the College of Science and Engineering he decided to write a software program that would change the way we would clerk a competition, nationally and internationally. He wrote Meet Director V1.0 1996. Then in 2009 he implemented an improved Meet Director Version 2. He acted as Chief Competitor Steward at Nationals, American Cups and Assistant at World Cups.

He was always there for every competition and could fix any problem. He was a lifesaver when USS was struggling to write a program for US competitions, local to the highest level. He coordinated clerking with timing and made every meet run efficiently. Brian’s program is dependable and accurate.

He loved to experiment with new recipes, sailing on Lake Superior, and juggling for his grandkids amusement. He provided advice and was an excellent sounding board, for the people he interacted with in so many capacities. He engaged with people in a way that brought warmth, humor, inclusiveness, and goodwill. Not only did he find learning in every situation, we all learned from him and by how he carried himself and treated others with dignity and respect. Brian was inducted into the National Speed Skating Hall of Fame on June 1, 2018 in Milwaukee, WI.

Some of the Competitions he attended:

Jerry Search said: Brian Westover was one of the “Good Guys” in our sport, and will be missed by all. The only time he wasn’t smiling was when his face was pointed at his computer screen.