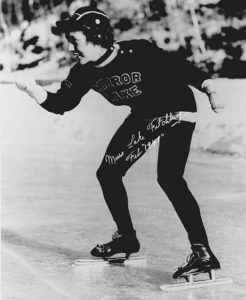 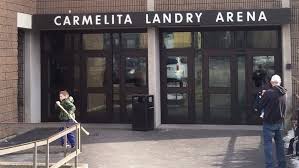 Carmelita was born July 1, 1917. She won the title of National and North American Outdoor Champion, with her peak being in 1942. She was scheduled to compete in the 1942 Olympics that were cancelled due to World War II. Carmelita was nominated to the National Speedskating Hall of Fame on May 17, 1969 in Anaheim, California.

Born in Canada on July 1, 1917, she was the daughter of Didace and Alice (LeBlanc) Landry, and moved to Fitchburg when she was 6 years old. When she was 7 years old, she lost the sight in her right eye following an explosion accident. Despite her handicap, at the age of 11, with borrowed skates, she became an accomplished skater at the former St. Joseph Rink in the Cleghorn section of Fitchburg which is now a parking lot. For Christmas that year her father bought her first pair for $5.

When she was 17, Miss Landry began to train for speed skating with the former Mirror Lake Skating Club in Coggshall Park, Fitchburg. Through the seasons she would hike, skate and bike in order to be in condition for competitions.

From 1934 to 1942 Miss Landry dominated the sport of women’s speed skating in the United States and Canada, competing with the U.S. Speed Skating Club. In 1939 she won the Silver Skate Derby; in 1941, she won both the New England Speed Skating Championships in Fitchburg and the Women’s National Championship at LaCrosse, Wisc.

She was scheduled to compete in the 1942 Olympics, but due to World War II the games were canceled. At that time she was acclaimed to be the Women’s Speed Skating Champion of War Time.