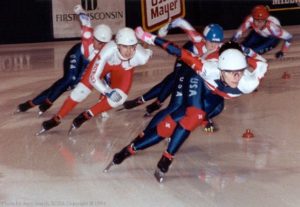 A three time Olympian (1992, 1994, 1998) Cathy won individual gold medals in the 500m in 1992 and 1994, setting an Olympic record at the distance in 1994. She also earned a silver medal (1992) and a bronze medal (1994) as a member of the 3000m Short Track relay team. These accomplishments make Cathy one of only two people to ever win gold medals in consecutive winter Olympic games and the third most decorated winter Olympian. After winning the National Short Track Championship as an Intermediate and medaling in the ISU Championships as a member of the U.S. relay team in 1979 and just missing a spot on the 1980 Olympic team, Cathy retired from the sport. She returned in 1988 and made World Teams in 1989, 1990, and 1991. She retired again following the 1992 and 1994 Olympics to return each time to earn memberships on the 1994 and 1998 Olympic teams. Cathy holds a Physical Fitness Expert certification and is the owner of Cathy Turner’s Empire Fitness Center. She established the Cathy 4 Kids Foundation, which sponsors charity golf tournaments to benefit the foundation. Cathy holds a B.S. in computer systems from Northern Michigan University and is certified as a PC/Network Technician. She was inducted to the National Speedskating Hall of Fame on April 26, 2003 in Anaheim, California. 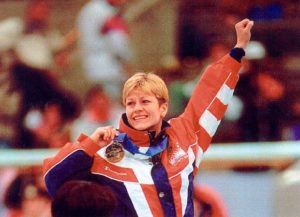 Turner began speed skating as a child, specializing in the fast-paced short-track version of the sport, and by 1979 she was the U.S. national champion. A year later, struggling with burn-out, she retired from competitive skating to try her luck as a professional pop singer and composer under the stage name Nikki Newland.

After an eight-year layoff, Turner returned to the ice in 1988 and four years later made the U.S. Olympic team. When short-track made its debut at the Winter Games in Albertville, France, Turner won the 500-metre race by only 0.04 second and helped the U.S. capture the silver in the 3,000-metre relay. She briefly skated professionally with the Ice Capades but came out of retirement again in 1994 to compete at the Games in Lillehammer, Norway, where she took the gold medal in the 500-metre event in the Olympic record time of 45.98 sec and led the U.S. to a bronze in the 3,000-metre relay.

Turner’s brash manner and highly aggressive style on the ice, especially in the tight turns common to short-track racing, was often criticized by other competitors. At the world championships in 1991, her preliminary heat had to be restarted several times because of accidents. In Lillehammer, she won the 500-metre final amid allegations of bumping her opponent, and she was officially disqualified in a semifinal heat of the 1,000-metre event.