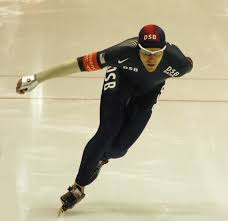 At the young age of 17 months, Chad stepped out on his first pair of inline skates and from this fateful moment, he became the most decorated inline speed skater ever. He won nine straight World Overall Championships and 52 World Championship victories before switching to ice in 2002. In less than two years, he managed to break the World Record in the big combination and became the World Allround Champion.

Chad held a spot on the 2006 and 2010 US Olympic teams, bringing home a total of five Olympics medals in five different distances, a feat that had only ever been achieved by Eric Heiden until Chad. Whether he was on inlines or on the ice, he has always been dedicated to his sport and becoming a champion. Since retiring in 2010 at the age of 33, Chad has continued to do motivational speeches around the country. He has also been devoted to his ministry “Double Push”, where he talks to audiences about how faith has played a role in his life and his successes. Along with these activities, Chad has also started a speed skating equipment company called “DP52 Racing”. If this was not enough, The Chad Hedrick Foundation has raised hundreds of thousands of dollars for the Special Olympics.

Chad Hedrick (born April 17, 1977) is an American inline speed skater and ice speed skater. He was born in Spring, Texas.

Hedrick revolutionized the inline speed skating world with his unique technique, called the double push, or DP. During his career he won 93 national championships and 50 world championships, as well as having a brand of inline skating wheels named after him.

After winning his 50th World Championship, in Oostende, Belgium, in 2002, he switched to ice speed skating after watching, on a television in a Las Vegas casino in 2002, fellow inline skater Derek Parra win a medal at the Salt Lake City Winter Olympics. In February 2004, a year and a half after he made his switch, Hedrick won the 2004 World Allround Speed Skating Championships, knocking more than a point off the world record points, reducing it to 150.478. On March 12, 2004, Hedrick won the gold medal in the 5,000 meters during the 2004 World Single Distance Championships, which were held Seoul, South Korea. In 2005 he successfully defended his 5,000 m world title in Inzell, Germany. At the 2005 World Allround Speed Skating Championships he lost his title to Shani Davis. In 2010 in Vancouver, Hedrick qualified for the 1000 m, 1500 m, 5000 m, and the long-track team pursuit in the 21st Winter Olympiad held in Vancouver. Hedrick lost to Håvard Bøkko in the final pair of the 5000 m event. He would ultimately finish 10 places behind the winner, Dutchman Sven Kramer, in 11th place. Hedrick skated a 1:09.32 in the 1000 m which was good for the bronze behind Davis and South Korea’s Mo Tae-bum. Hedrick was the leader of the team that won a surprising silver medal in team pursuit with an upset of the heavily favored Netherlands team in the semifinals bringing Hedrick’s Olympic career to an end with a total of five medals with each one in a different event.

Hedrick has set six world records in speed skating, but these have later been broken by others.