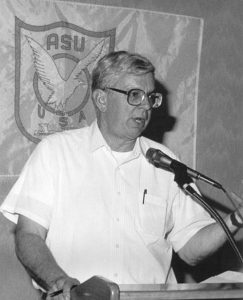 Charles was born February 2, 1939. He served as the Chairman of the Tracks and Distances committee from 1974-87. He worked as the Associate Editor of the ASU Handbook from 1980-81 and as the Editor from 1981-83. Along with this, he was the chairman of the Legislative Committee starting in 1988, a Board of Control member for the Northeast Association from 1969-84 and again starting in 1990. Charles held officials positions as a National Judge from 1967-72, a National Timer from 1972-79, a National Assistant Starter from 1976-79, and a National Starter from 1979 on. He was a Trustee of the National Medallion/Medal Fund starting in 1995 and drafted the Track Diagrams that appear in the ASU Handbook, along with tackling the conversion of the diagrams when the sport changed from distances in yards to distances in meters. Charles was inducted to the National Speedskating Hall of Fame on May 23, 1999 in Oconomowoc, Wisconsin.