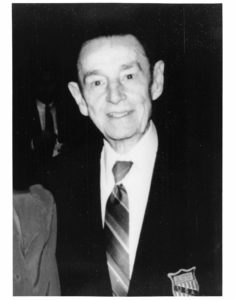 Charles was born October 24, 1912 and passed away on December 25, 1989. Five of his six children were speed skaters in Champaign, Illinois, and won numerous National and North American Championships between 1957 and 1992. For 32 years Charlie took his turns at managing, coaching, officiating while holding all club offices. For over ten years, he maintained the official records for the ASAI and the ASU and served as a National Timer for over 20 years. He was inducted into the National Speedskating Hall of Fame on May 16, 1992 in St. Louis, Missouri.