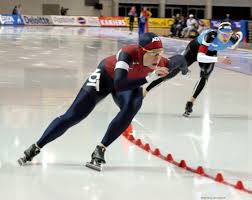 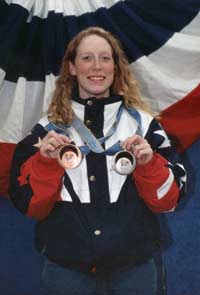 Christine “Chris” Witty began speedskating after seeing a flyer for a standard recreational skating event in her hometown. She laced up her brother’s skates and competed in the 500m event where she took first place, and the rest is history. She has had an extremely successful career and is most noted for her success in the 1000m and 1500m distances. In 1996, Chris was the World Sprint Overall Champion and won the Silver Medal in the World Single Distance 1000m. The following year she took third place in the World Sprint Overall Championships. Although she made her first Olympic team in 1994, it was in the 1998 Olympic Games that she made her mark by winning a Silver Medal in the 1000m and a Bronze Medal in the 1500m. That same year she placed third in the World Sprint Overall Championships and won Gold in the 1000m at the World Single Distance Championships.  A couple years later, in 2000, she continued to take the podium by placing third in the World Sprint Overall Championships and earning the Bronze medal in the World Single Distance 1000m. Chris earned a spot on the Olympic Team again in 2002 where she won the Gold Medal in the 1000m while also breaking the World Record in that same distance. In 2006, she made her fourth Olympic Team and competed in the 500m and 1000m distances. It was at these Olympics that she had the privilege of carrying the United States Flag during the Opening Ceremonies. Not only is Chris an accomplished speedskater, but she has also found success in cycling. In 2000 she qualified for the cycling Olympic team, where she placed fifth in the 500m time-trials at the 2000 Summer Olympics. Chris became only the ninth American to ever compete in both the Summer and Winter Olympic Games. After receiving her Bachelor’s degree from the US Sports Academy in sport coaching, she went on to receive her Masters in Human Movement Science from the VU University Amsterdam. Chris is currently living in Eindhoven, Netherlands, where she is working as an exercise physiologist in a sport medical clinic. She continues to be involved in speedskating by growing the sport in her community and hosting clinics from time to time. 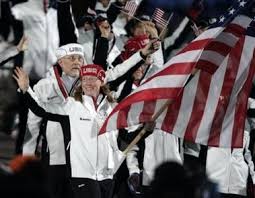 Chris began speed skating at the age of nine, wearing figure skates. Despite this challenge, she won her first race by such a huge margin that she was greeting her mother in the stands while her competitors finished. A club coach took notice and asked her to consider training seriously. She had hoped to become a basketball player but realized she had a real talent for speed skating.

At eighteen, Chris went to her first Olympics in 1994. She did not stand out until the 1998 Olympics in Nagano, where she was the only athlete to win two individual medals. When she won her gold medal in the 1000 meters at the 2002 Olympics, she also set a world record.

Chris is also a competitive cyclist and went to the 2000 Summer Olympics, where she finished fifth in the 500-meter time trial.

Chris Witty has been active in educating the public about child abuse.