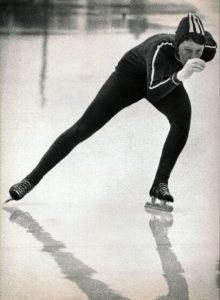 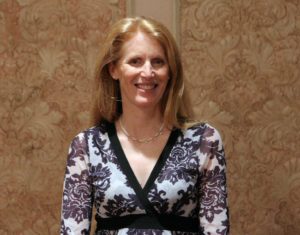 It was inevitable Connie Carpenter would speedskate. Growing up in Madison, WI, near a flooded and frozen playground, she spent hours skating with her brothers and friends. “Girls didn’t have a lot of sporting opportunities and I was always extremely active,” Connie said. “I skated every night on that rink.”
At twelve, Connie joined the Madison Speedskating Club. Two years later, she was on the 1972 Olympic speedskating team, one of the youngest Olympians ever. Coach Finn Halverson took her under his wing, preparing Connie for competitions, offering her physiological support and direction. Taking third place in the 500m at the Olympic trials, Connie was headed for Sapporo, Japan, where she finished seventh in the 1500m. Connie was Senior National Long Track Champion in 1976, and Senior North American Long Track Champion in 1976. She also set three Senior National Records, and three North American Senior National records.

As a teenager, Connie didn’t advertise the fact she was a world class skater. “I missed a lot of school that year and I kept to myself,” she said. “Everyone probably thought I was a recluse or an oddball, but my biggest fear was that my peers would see me in lycra.” In Sapporo, Connie recalls the Olympic team was free to visit the city without any strict supervision. She said the next Olympics in Munich, Germany, where seven Israeli team members were killed, changed the Olympic environment forever. “We were the last naïve Olympians in Sapporo,” she said. “I always wanted to go to the Olympics again and thought I was just getting started as a speedskater.”

Unfortunately, that wasn’t to be. One week before the 1976 Olympic trials, Connie’s peroneal tendon tore, leaving her unable to skate. “I didn’t make the team and I was devastated.” Connie turned to cycling and rowing. She holds twelve national cycling championship titles, earned four world championship medals, and one world title. Connie won the first woman’s cycling event in Olympic history. Influenced by Halverson, Connie attended University of California, Berkeley, obtaining a degree in physiology and the University of Colorado, earning a master’s degree in sports science.

Connie married Davis Phinney and they have two children, Taylor and Kelsey. Taylor competed on the U.S. Cycling team at the 2008 Beijing Olympics and Kelsey is a Nordic ski racer. Connie, born on February 26, 1957 in Madison, WI, was inducted into both the U.S. Bicycling Hall of Fame and the U.S. Olympic Hall of Fame. She was inducted to the National Speedskating Hall of Fame on April 18, 2009 in St. Louis, MO.