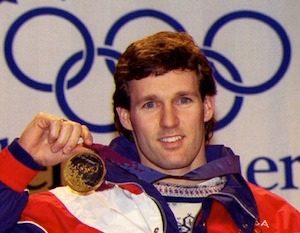 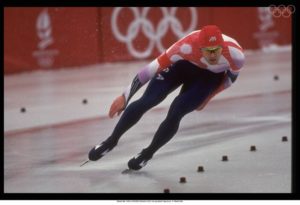 Olympic.org:
By the time of the Olympic Winter Games in Lillehammer in 1994 Dan Jansen had won seven overall World Cup titles and set seven world records. However at the Olympic Games he had experienced nothing but disappointment.

In Lillehammer, Jansen was the overwhelming favourite at 500m, but he slipped and finished eighth. Despite his great non-Olympic success, Jansen had never won an Olympic medal having competed in seven Olympic races over a ten-year period. His last chance was the 1,000m, a distance at which six of his opponents had better times. Jansen was on world record pace when he slipped during the penultimate turn. Fortunately, he steadied himself and powered on to set a new world record (1:12.43) and win an Olympic gold medal at last.