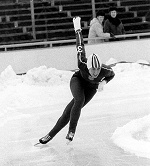 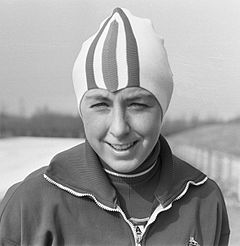 Dianne was born May 19, 1951. During her career she won the silver medal in the 500m and bronze in the 1000m during the 1968 Olympic Games and upon her Olympic return in 1972 she brought home the gold in the 1500m and silver in the 3000m. Along with this Olympic success she set a record in the 1500 meter, held a spot as a member of seven World Teams (1966-1972), during which she won fifteen World medals. After her retirement she continued in the sport as the coach of the 1976, 1980 and 1984 Olympic Teams who won thirteen medals in total and as the coach of eight World Teams who won over 100 medals, thirteen titles, and set seven World records. She was inducted to the National Speedskating Hall of Fame on May 17, 1986 in Cleveland, Ohio. 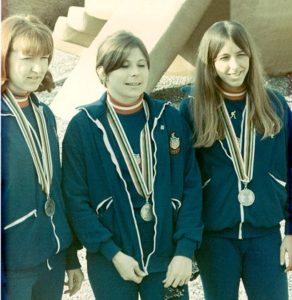 Author of the Complete Handbook of Speedskating Jan. 1, 1984

Dianne Holum was the first American woman to win an Olympic gold medal in speedskating’s 1,500-meter event. She trained in Northbrook, Illinois, the “Speedskating Capital of America,” under coach Big Ed Rudolph, who also trained championship sprinter Anne Henning . At age 14, Holum became the youngest skater ever to compete in the World championships. At the 1968 Olympic Games in Grenoble, she was involved in a rare three-way tie with Americans Jennifer Fish and Mary Meyers for the silver medal in the 500 meters (Ludmila Titova of the Soviet Union placed first); then Holum went on to capture the bronze in the 1,000 meters. (Monika Pflug of Germany won the gold; Atje Keulen-Deelstra of Holland took the silver.)

Even with all those accomplishments, she is most well-known for coaching Eric Heiden to 5 gold medals in the 1980 Lake Placid Olympics.

Before the 1972 Olympics in Sapporo, Japan, Holum worked as a waitress for a year to finance a training period in the Netherlands. Her determination was rewarded with an Olympic gold medal in the 1,500 meters, which she won in 2:20.83, breaking the mark of 2:22.40 set by Kaija Mustonen of Finland in 1968. (Holland’s Christina Baas-Kaiser and Atje Keulen-Deelstra placed second and third, respectively.) Holum also walked away with the silver medal in the 3,000-meter event with a time of 4:58.67. Baas-Kaiser won the gold with a time of 4:52.14, an Olympic record.

Holum retired from competition in 1973 to coach. In addition to coaching a successful men’s team, she was credited with revitalizing women’s speedskating in America. World champion Beth Heiden was her student, as well as Holum’s own daughter, Kirstin Holum , who at age 16 was America’s best speedskating hope for the 1998 Olympics in Nagano, Japan. Kirstin failed to medal in the games, though she set an American record in the Olympic longtrack 5,000 meters, completing the course in 7:14.20. In 1996, Dianne Holum was inducted into the Women’s Sports Hall of Fame. In 1997, she and Pat Wentland were named by the U.S. Speedskating Association and recognized by the U.S. Olympic Committee as National and Developmental Coaches of the Year for their sport.