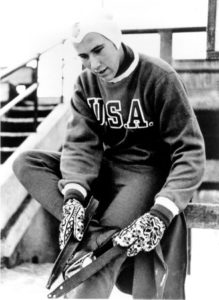 Don was born December 9, 1929. He was an Olympic silver medalist in the 500m in 1952 and a World bronze medalist in 1955. Don had the honor of serving as the flag bearer at the Olympic Games in Squaw Valley in 1960. He was inducted in to the National Speedskating Hall of Fame on May 15, 1976 in Colorado Springs, Colorado.

Like many other American speed skaters of the 40s and 50s, Don McDermott never won a national title, because they were totally monopolized by Ken Bartholomew. But McDermott won his share of races. His first big title came at the 1949 Silver Skates in Madison Square Garden, and in the next two years he won several other invitational races and the Chicago Silver Skates. At the 1952 Olympics, he finished second behind fellow American Ken Henry. McDermott also competed in the 1956 Olympics, but without much success. After his Oslo silver medal, his biggest competitive moment came in the 1955 World Championships, when he finished third in the 500 meters. At the 1960 Olympics, McDermott was chosen by the U.S. team to carry the flag into the stadium at the opening ceremonies. McDermott’s career was with the U.S. Postal Service, for whom he has held various management positions.