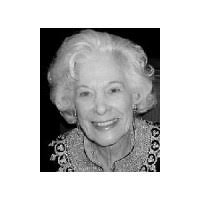 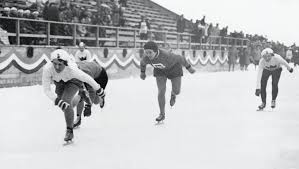 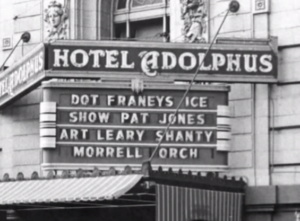 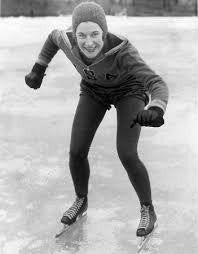 Dorothy was born in 1915 and passed away on January 11, 2011. She was a National Outdoor and North American Indoor Champion, with her peak being in 1936. AT the 1932 Olympics she competed in the women’s speed skating events which were held as demonstration sport. She finished third in the 1000 meters event and fifth in the 1500 meters competition. She also participated in the 500 meters event but was eliminated in the heats. She was inducted into the National Speedskating Hall of Fame on May 15, 1966 in Colorado Springs, Colorado.

Wikipedia:
In 1932, she competed in the women’s speed skating events which were held as demonstration sport. She finished third in the 1000 metres event and fifth in the 1500 metres competition. She also participated in the 500 metres event but was eliminated in the heats.
According to her Dallas Morning News obituary, Franey won national speed skating championships four years running from 1933-36. She later headlined her own ice revue for 14 years at the famed Adolphus Hotel in Dallas. In 2002, she carried the Olympic torch to City Hall in Dallas at age 89.

From the history of the Adolphus Hotel, Dallas, Texas:
“From 1936 to 1965, the hotel had a rolling retractable tank ice skating rink installed in its Century Room. The Century Room was a multi use space that was many things to many people: a Hawaiian restaurant, nightclub, ballroom with live music by Glenn Miller and His Orchestra and skating venue… and make no mistake, it was the place to be and be seen in the Texas city in its day.In the summer of 1943, U.S. Olympic speed skating turned figure skating star Dorothy Franey Langkop was offered a six week run with her skating show at the hotel after performances in the Iceolite Revue with Sammy Jarvis at the Book-Cadillac Hotel in Detroit, St. Louis Park Plaza Hotel and shows in Chicago, Mexico City, Kansas City and at Rockefeller Center in New York established her as a bona fide skating attraction. Franey choreographed, directed, produced and starred in her Dot Franey Ice Revue which opened in The Century Room in October of that year was held over for the next fourteen years. She created new shows for the hotel every six weeks. In its heyday, the Adolphus Hotel ice shows were so hugely popular with the society women of the south that reservations for her lunchtime shows had to made two weeks in advance. The shows featured ice comedians, adagio pairs acts, ensemble pieces and of course Franey, who skated on speed skates, figure skates and stilt skates in the shows. For the record, Dot Franey was kind of a big deal.”

Youtube Video of Dot Franey ice show
published by Jimmy Langkop:
“Dorothy Franey Langkop held an unprecedented 12 out of a possible 14 world records in Women’s Speed Skating from 1932 to her retirement in 1938. She then did the unheard of and became a professional figure skater creating her own ice shows touring across America and Mexico. In 1942 she was starring on Broadway at the International Casino in Times Square, when the Adolphus Hotel in Dallas, Texas made her an offer she couldn’t refuse to bring her ice show to Dallas for a 6-week run in the fall of 1943. It instantly became the biggest attraction in Dallas and the Southwest and the Adolphus held her show over for the next 14 years.
Video: “Remember When” KERA-TV Dallas 1994
Music: “In The Mood” by Glenn Miller and His Orchestra.
This video was edited, produced, and published by Jimmy Langkop.”There is no monetary gain involved. This is done for educational purposes as a public service. The video & audio clips used in the following presentations were selected under the “Fair Use Doctrine” for their outstanding message, graphics, videography or music.” 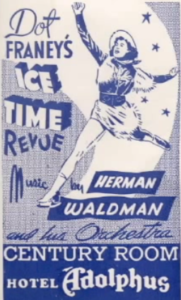 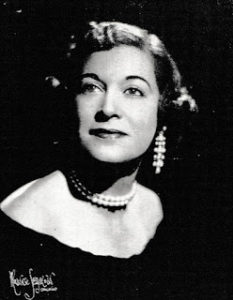