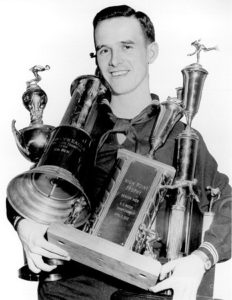 Edgar was born December 10, 1927. Edgar Dame of Revere, U.S.A. was the only American speed skater who won the North American Indoor title three times from the start of the event in the 1930s. He won between 1949-50 and 1953, and set seven National Indoor Records. His record was beaten by American women Barbara DeSchepper of Detroit, who won the title four times in 1950, 1953-55, and Jeanne Ashworth of Wilmington, who won the title five times in 1957-1961.
Edgar was a contemporary of Mario Trafeli and Jack Disney. He was elected to the National Speedskating Hall of Fame on May 14, 1972 in Colorado Springs, Colorado.

Dame was raised and educated in Revere, Mass., and graduated from Revere High School in 1945. He also resided in Cold Spring Harbor, N.Y., and Jupiter, Fla. Dame was a world-class speed skating champion. He set eight world records in various events. He participated in the Boston Marathon twice, as well as the Marine Corps Marathon in Washington, D.C., when he was over 50 years old.
Dame worked for Avis Rent-A-Car, ending his career as the senior vice president and general manager of the worldwide car leasing division. His retirement in 1986 capped a 40-year career with Avis.