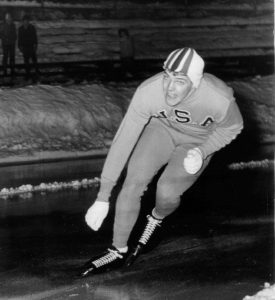 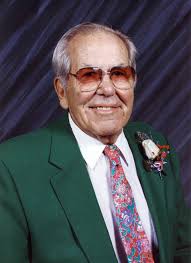 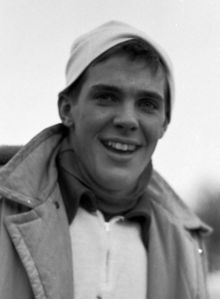 Ed was a speedskater in the Chicago area in the 1930’s, who went on to found the Northbrook Skating Club in 1953, and was a pioneer in coaching development and training methods for metric style skating. He was a World and Olympic Team Coach from 1961-1972, helping to transform the Northbrook Illinois club into a powerhouse.

Ed traveled to World Championships in Europe and Asia, at his own expense, (prior to formation of the United States International Skating Association), when there were no funds available to send competitors to World championship events.

Eddie was a member of the 1960, 1964 and 1968 Olympic teams and competed in the 1962 World competitions in Russia as the only U.S. competitor. He was the youngest male to ever make a Speed Skating Team in 1960. In 1963, in Karasawa, Japan, he won two silver medals in the 500-meter and set a world record. He has won the Intermediate National Short Track Championship, and the Intermediate and Senior National, North American and U.S. Open Long Track Championship.

As a Commissioner of the Northbrook Park District, he was directly responsible for the development of Meadowhill Park, a skating and cycling facility that developed numerous World and Olympic Team Members. This was later renamed the “Ed Rudolph Meadowhill Park”.

Ed was the parks commissioner in Northbrook, Illinois, and saw Olympian Anne Henning when she first started speed skating at the age of 10. With his training, she made the World Team in 1970 at age 14.  At Helsinki in 1971, she won the 500m race at the World Championship. That same year at the World Sprint Championship in Inzell she won both 500m events. At Davos that year she set World records of 42.5 and 1:27.3 at 500m and 1000m. She concluded her career in 1972 at the Sapporo Games in Japan, by winning the gold in the 500m and a bronze in the 1000m.

After moving to Colorado Springs he coached the Broadmoor Speed Skating Club and volunteered to help in building the Colorado Springs Olympic Training Center, served as treasurer for the U.S. Olympians, Colorado Chapter. He was a philanthropist, and was awarded the highest volunteer award for working with Goodwill Industries of Colorado Springs for years, with more than $1 million in pro bono activities and direct financial support. “One thing about making an Olympic team,” said Rudolph, “it does provide a spirit, commitment and the drive to succeed. It’s our bond and a valuable one.”

He was inducted in to the National Speedskating Hall of Fame on May 19, 2001 in Albany, New York. he and his wife died in an auto accident July 19, 2009 in which another car swerved to avoid a deer and hit their car.

From encyclopedia.com: By 1975, Northbrook was known as the “Speed Capital of the World” and had trained twenty-nine national champions, eight world team members, and ten Olympic team members, of which eight were women.

Former Park District Commissioner Ed Rudolph helped design and build the bicycle track in 1960 with a perimeter for track cycling and a grassy infield for soccer games. During the winters, the Velodrome was flooded to create a speed skating rink and served as a practice rink for members of U.S. Winter Olympics teams. In the 1990s, the Park District ended that practice, due to the facility’s inability to retain water, which seeped through the soccer field. The track’s asphalt was resurfaced in 1989 and in 2004, and lights and seating were added.