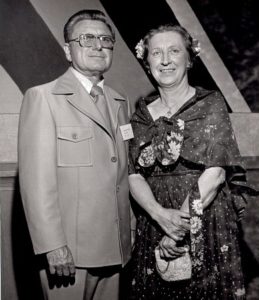 Elaine was born November 17, 1917 and passed away in 2006. During her life she won the title of National Outdoor and North American Indoor Champion. She never truly left the sport after her own retirement as she coached twelve skaters to their own National championships over a period of thirty years. Elaine was inducted to the National Speedskating Hall of Fame on May 20, 1978 in Oak Brook, Illinois.

At one time the fastest adult female speed skater in the country, Elaine B. Gordon would have been an Olympic contender if women were allowed to compete in the 1940s and ’50s.

“If there had been Olympics [for female speed skaters], she would have won the Olympics,” said her son, Edward. Mrs. Gordon was 45 in 1960, when female speed skaters were first allowed to compete in the Winter Olympics. “Elaine should have been on an Olympic team, but she was too old by that time,” said former Park Ridge resident and Olympic speed skater Barbara Lockhart.

Inducted into the Speed Skating Hall of Fame in 1978, she had peaked in 1946, winning both the National Outdoor and North American Indoor Championships.

From the 1950s to the 1980s, she coached 12 skaters, including Lockhart and her son Edward, to national championships.

“She was always on the lookout for talent,” Lockhart said. One day I was riding my bike–I would race cars home–and she was all ready to stop me to see if I wanted to skate when she realized I was already on her team.”

Born in Chicago, Mrs. Gordon did not start ice skating until after she graduated from Schurz High School in the 1930s. “There was a park right by where she lived in Edison Park, and they had all kinds of skating clubs, and they would keep a look out for who was skating, and found her,” her son said.

Mrs. Gordon discovered Lockhart at a Park Ridge rink when she was 8 and coached her for a year until Mrs. Gordon moved to Elgin, where she continued to mentor Lockhart. Lockhart took the first spot on the first female Olympic team in 1960 after winning the 500-meter race in national championships. “I attribute it all to her; she was always my mentor,” Lockhart said.

Mrs. Gordon, a coach for the Northwest Skating Club, later coached the Elgin and then Glen Ellyn Skating Clubs until the mid-1970s, her son said.

In addition to her son, she is survived by another son, Ted, and a brother, Ted Bogda.