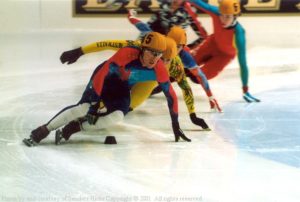 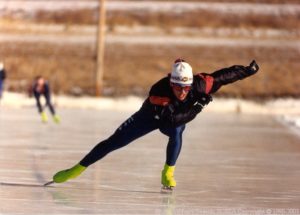 A four time Olympian (1988, 1992, 1994, 1998) and holder of two silver medals (1500m Long Track, 1988; 5000m Short Track relay, 1994), Eric is the first American to medal in two different winter Olympic sports. Eric established World records in the 1500m in Long Track (unofficial, 1988 Olympics) and 1500m Short Track (1993 World, Beijing, China). Between 1983 and 1995 Eric won numerous Long Track and Short Track championships, including the USISA Championships (Long Track 1988, 1989, 1990, and 1992; Short Track 1994, 1995), World All-Around Championship (1988), 1500m overall World Cup Championship (1992) and was consistently near the top year after year. Eric retired after the 1995 season to return and qualify as a member of the 1998 Olympic Team where he was selected as flag bearer for the opening ceremonies. Eric has served as the President of the Northeast Speedskating Association and as the U.S. Speedskating Short Track Program Director between 1998 and 2000. He established the Eric Flaim Foundation in 1998 to foster the development of programs to enrich children’s lives through sport. Eric is currently the U.S. Speedskating Eastern Regional Coach. He was inducted to the National Speedskating Hall of Fame on April 26, 2003 in Anaheim, California.

Sport-reference.com
Starting out as a short track skater, Flaim switched to long track for his international career. In his second senior season, he surprised at the World Sprint Championships by winning the second 1000 m and taking the overall bronze. At the Olympics, starting the week later, Flaim broke the World Record in the 1500 m, only to see [Andre Hoffmann] go even faster two pairs later. He closed out the season by unexpectedly winning the World Allround Championships, although the event at the highland rink of Medeo was influenced by weather changes. In the next years, Flaim had a hard time reaching his 1988 level, especially when he suffered a knee injury in 1990. After the Albertville Olympics, he switched back to short-track speed skating, which had now also gained Olympic medal status. Just two years later, he won his second Olympic silver medal, this time as part of the American short track relay team.