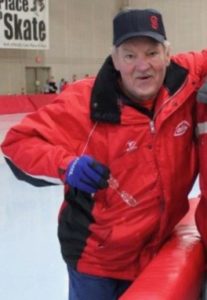 Inducted June 1, 2018
Ernie’s early interest in speed skating began in 1981 when his sons, Brian and David, started speed skating with the Badger Club, which he was the President of at one point. As a result of the coach’s retirement, in 1987 the family changed to the West Allis Speed Skating Club. In addition to local club involvement at each of these clubs, Ernie became involved in the Wisconsin Speedskating Association, the Wisconsin Olympic Rink and ultimately the Pettit National Ice Center. Ernie was president of the Wisconsin Seedskating Association from 2012-2013, the Vice-President of Racing for over ten years, and has been the Treasurer since 2013, a position he holds to this day. He was the head of the “Learn to Speed Skate” program at the PNIC for eight year and he taught these lessons at the the Wisconsin Olympic Rink and PNIC. He has also conducted time trials at the PNIC for 24 years.

Ernie has been a Chief Referee at a US Long Track Championship or higher since 1990 (over 25 years). A referee at Country Match and above since 1991 (Lake Placid, NY). His referee duties have included both Long Track and Short Track Championships. He has refereed both Age Group and Metric competitions. Ernie was the Chief Referee for Ladies for the 2002 Winter Olympic Games in Salt Lake City, UT. Ernie was the Chief Referee at the Special Winter Olympics Winter World Games in PyeongChang, South Korea in 2013. He was also a referee at World Cups and World Championships in 1996 and every year from 1998-2011.

He is a member of the USS Officials Committee, Long Track Committee, and George Howie Award Committee. Ernie has served as a speed skating official at the Wisconsin Olympic Rink and the Pettit National Ice Center as well as numerous venues and competitions world wide since before 1990.

Been an ISU Referee for 18 years and a USS Level 4 and Level 5 Referee for over 20 years
ISU Referee at World Cups in the U.S. Canada, and Japan
ISU Referee at World Championships (2x), the Netherlands (3x), Germany (3x), Russia, Japan, U.S. (3x), and Canada (2x)
Been awarded the George Howie Award in 2014
Ernie was inducted into the National Speed Skating Hall of Fame on June 1, 2018 in Milwaukee, WI.