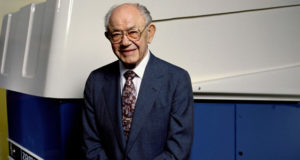 Inducted May 18, 2013
Frank Zamboni had a natural talent for invention, which eventually led to the creation of the Zamboni ice resurfacer. As his son, Richard Zamboni said, “He never saw mechanical challenges as a place to stop; they were a beginning point. He always seemed to be thinking about the machines and never really sat back and felt that the product was the best it could be. He knew that there had to be a way to continually improve and worked on it day in and day out.” When Frank, his brother Lawrence and their cousin Pete decided to use refrigeration equipment to build an ice rink in Southern California, Frank began to apply his innovative thinking and he soon realized that manually resurfacing the ice was labor and time intensive and he set out to find a more efficient process. After almost a decade of testing various concepts, Frank introduced the Model A – the world’s first self- propelled ice resurfacing machine.

Because of the record breaking performances in the 1960 Squaw Valley Olympic Games, operators of large ice skating tracks in Europe and Japan became aware of the ice resurfacer’s capabilities. Now, six decades after the first machine took to the ice, over 9,500 have been delivered and the machine has had a significant impact on ice sports in arenas around the world. Frank’s continued contribution to the sport included a “one of a kind” machine, his Model L that was built for the 400 meter outdoor track in West Allis, Wisconsin and his design continues to provide outstanding surfaces for the nation and the world’s speed skating athletes. Frank was quite active in and even helped to found organizations which supported a variety of ice sports. Frank was a founding member of the Ice Skating Institute (ISI) and he was an active member in a number of ice industry and arena management organizations. Frank passed away on July 27, 1988. He was inducted to the National Speedskating Hall of Fame on May 18, 2013 in Salt Lake City, UT.

From the award presentation:

After attending trade school Zamboni opened an electrical supply business with his brother, Lawrence, in Los Angeles in 1922. Shortly thereafter, in 1927, he and his brother added an ice making plant and ventured into the ice block business. The ice block business ran until 1939 when the brothers realized that the industry was dying due to the advent of electric refrigerator units. The two chose to open an ice rink with the excess refrigeration equipment they had. The Iceland Rink officially opened in 1940 and was quite popular. One of the reasons it was so popular was because Frank had devised a way to eliminate the rippling in the ice that occurred from the pipes laid underneath the ice to keep it frozen. He got a patent for his invention in 1946 and then in 1949 he improved it further. The original process which took three men 90 minutes to complete could now be done in 10 minutes with one man and Zamboni’s new machine. He applied for a patent right away and started the Frank J. Zamboni & Co. business to sell his new ice machines. He got his patent in 1953 and expanded his business internationally due to demand and popularity of the machines. The name “Zamboni” is still trademarked by the company although it is commonly used to refer to all ice resurfacing machines.
He later went on to create machines to remove water and paint stripes from artificial turf and another to lay down and roll up the turf. His final invention, an automatic ice edger, came in 1983. He passed away from lung cancer in 1988, but the Zamboni business remained and is still operated by family members to this day.