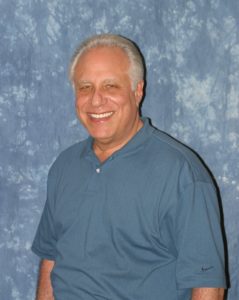 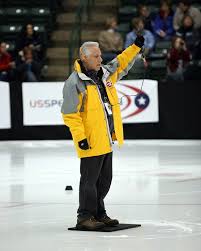 On one of the few instances National Speed Skating Hall of Fame inductee Fred Benjamin actually walked on the ice, he fell, cut his head open and had to be rushed to a medical facility for stitches. Although he’s not a skater by any means, Fred’s contributions to the sport of speedskating are invaluable and have changed the sport for the better.

As the parent of a speedskater, Fred was dedicated to helping his children succeed. When his son, Jeff, developed an interest in speedskating, Fred helped organize the Highland Park Speedskating Club which operated for two years before many of its members joined the Northbrook Speedskating Club. He was also roped into officiating during a 6 a.m. Sunday practice. “I didn’t really want to get up that early but I did go that day,” Fred says. “After that, I kept being asked to act as a Starter in local meets around the Midwest. I just kind of went around the circuit giving the warning, ‘I don’t really know what I’m doing but I will help if you need it.’”

Surprisingly to Fred, he was asked to officiate at the Goodwill Games in St. Petersburg, Russia. While there, he caught the notice of Ottavio Cinquanta, a representative of the ISU. Cinquanta put Fred on the list of ISU approved officials; now Fred travels the world officiating at ISU level short track speedskating events.

After raising $15,000 for the Northbrook Speedskating Club, Fred was elected to serve as the president of the Amateur Speedskating Association of Illinois where he witnessed what he believed to be unfair practices in the national speedskating governing body, USISA. He campaigned to get the open meetings act enforced for board meetings and held USISA accountable for decisions made that didn’t adhere to USISA rules. Fred was instrumental in creating the merger between USISA and the ASU, resulting in the formation of US Speedskating in 2002.

Fred served as president of US Speedskating from 2000 until 2002. During that time his efforts focused on the goal of merging two different organizations into one coherent, effective national governing body. That goal was realized with the formation of a single national federation, US Speedskating.
“We needed to harness all the assets and expenses to have an influx of money in order to handle the development process,” he says. “We needed to create a cohesive organization. I’ve enjoyed trying to make this sport more positive and trying to make it fair.”
While still working as an active ISU official, Fred serves as a member of the ISU Disciplinary Committee, holds USS officials’ clinics around the country and serves as a board member for US Speedskating. As a lawyer practicing with the firm Benjamin & Shapiro in Chicago since 1969, Fred uses he legal knowledge to ensure athletes are treated fairly and, as part of that process, helped draft the arbitration process for US Speedskating.

On being inducted into the National Speed Skating Hall of Fame, Fred said he was absolutely surprised and honored. “I was actually flabbergasted,” he says. “I’ve seen other people inducted, but never thought I was at that level.” Inducted in Bethlehem, PA, on April 19, 2008.