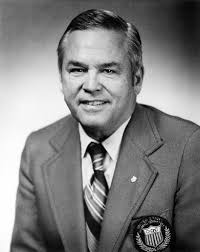 George was born December 28, 1918 and passed away on September 11, 1997. He was active in the promotion of speed skating, starting in 1954 with the Oconomowoc Speedskating Club. From this point, he went on to be the president of the Wisconsin Skating Association from 1965 to 1967, a founding member of USISA and Director of Public Relations for the organization from 1965 to 1972, and served as president of USISA from 1972 to 1984. He was also involved in obtaining approval for the first refrigerated 400 meter track in Milwaukee. George was inducted to the National Speedskating Hall of Fame on May 15, 1987 in Southgate, Michigan.

The George Howie Award is given to members of the speedskating community for dedication to the sport.