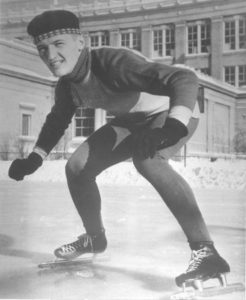 James was born June 6, 1930 and passed away August 28, 2010. He won the titles of National and North American Indoor and North American Outdoor Championships and set two National Indoor records. As coach of the Glen Ellyn Club (1955-60) he developed five National Champions, three North American Champions and a 1960 Olympic team member. James was inducted to the National Speedskating Hall of Fame on May 14, 1983 in St. Louis, Missouri.

Hall of Fame Speed Skater and Ice Hockey Innovator
For over sixty years, Jim Campbell had a passion for all things related to ice skating. First as a competitor and later as a coach and administrator, he loved being connected to skating. Mr. Campbell, 80, died of natural causes Saturday August 28 after a brief illness. Born and raised on the North Side of Chicago, Mr. Campbell became captivated by speed skating. He trained under Olympian and Hall of Famer Eddie Schroeder and skated for the Pierce Skating Club. By the mid-1950’s, Mr. Campbell was one of the top speed skaters in the country, winning both Illinois state and national championships, including the 1953 National Indoor Championships. In 1955, he won the prestigious Chicago Silver Skates competition. He went on to win both the North American Outdoor and Indoor Championships in 1957 and 1958, respectively. He was elected into the National Speed Skating Hall of Fame in 1983. In 1982, Mr. Campbell moved to Colorado Springs, Colorado. There he became an avid mountain biker and long distance runner, racing in both the Chicago and Boston marathons. He competed in the Crested Butte to Gunnison bike race and successfully rode to the top of Pikes Peak. But he never lost his love for the ice. In 1997 he created the Campbell Hockey League. The League quickly became popular, providing adult hockey leagues for players of all skill levels. Mr. Campbell continued to teach power skating to young players, a program he pioneered in the 1970’s to improve skaters’ efficiency and skating skills. Mr. Campbell is survived by his wife, Phyllis; his sister, Peggy Powers; and his seven children, Susan, Mark, Jim, Beth, Meg, Amy and Sean. Donations can be made to The Leukemia and Lymphoma Society.