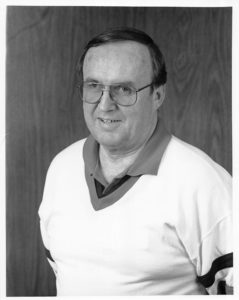 James was born September 21, 1932. He began skating as a Junior Boy in 1947 and spent the next nineteen years as an active competitor before transitioning to the role of coach and officer in the Missouri Skating Association. His involvement in the sport continued to grow as he became a national and international referee as well as the Commissioner of Officials, Vice President, and President of the ASU. Part of his work in the ASU was the development of the current protocol. He also served as the Technical Director at two World Short Track Championships. James was inducted into the National Speedskating Hall of Fame on May 18, 1997 in St. Louis, Missouri.