Jeanne was born July 1, 1938. She was a fourteen time National and North American Indoor and Outdoor Champion in the Senior Class. In the first official Olympic speed skating event held for women in 1960, she won the bronze medal. During her career she set eleven National Indoor records. She was inducted to the National Speedskating Hall of Fame on May 3, 1975 in Madison, Wisconsin.

Jeanne Ashworth, who arrived at the 1960 Winter Olympics in Squaw Valley, Calif., in the first group of women to compete in speedskating at any Olympics and won a bronze medal in the 500-meter race, died on Oct. 4 at her home in Wilmington, N.Y., near Lake Placid. She was 80.

Her longtime partner, Christine LeFevre, said the cause was pancreatic cancer. Ashworth had won several speedskating championships in the United States when she arrived at the outdoor Olympic skating rink in Squaw Valley on Feb. 20, 1960. She was nervous, having spent a sleepless night wondering if Russian women would sweep the four women’s races.
“Remember,” her mother, Alberta, told her, “they’re only human beings.”
In a race in which the skaters compete against each other in pairs, Ashworth and a competitor went ninth. She had to better the earlier results of Helga Haase of Germany, who finished at 45.9 seconds, and Natalia Donchenko of the Soviet Union, whose time was 46.0 seconds.
“I remember I was on a kind of magic carpet,” Ashworth told The Lowell Sun in 2010. “About 10 seconds from the finish, I kind of hesitated and struggled to the end. It took about two-tenths of a second off” — the difference between a bronze and gold medal.

Her time, 46.1 seconds, earned her the bronze. She was the only American woman to win a speedskating medal at Squaw Valley. Ashworth helped move women toward an equal footing with men in speedskating. The sport had been an all-male domain since it was introduced at the 1924 Winter Games in Chamonix, France. Women’s speedskating was given so-called demonstration sport status at the 1932 Winter Games in Lake Placid, N.Y., but those results did not count.

She was not done at Squaw Valley after the 500-meter race. She competed in three other events — she earned no other medals — but was pleased with her overall performance. “It was all so lucky because I didn’t know too much about what I was doing,” she said, summarizing her success in an interview with Lake Placid News in 2016. “I just went out and skated fast.”

A few days after the 500-meter race, Ashworth found herself in the center of a dispute described as a “mutiny” by the media. She was quoted by United Press International as saying that she could have been helped by having a coach “who knew something about Olympic skating,” and that the only coaching she had received in Squaw Valley had been from a Russian competitor, Klara Guseva-Nesterova. 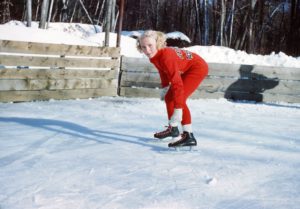 Jeanne began skating on a small pond near her house when she was around 7 or 8 and competed in her first race, at Boston Garden, when she was 10.

Although one of her teammates supported her, Ashworth insisted that she had been misquoted. She did say, however, that American speedskaters “should study more the science of skating as the Russians do.”
Jeanne Chesley Ashworth was born on July 1, 1938, in Burlington, Vt., and moved with her family to Wilmington, Mass., when she was young. Her father, Raymond, and her mother, Alberta (Black) Ashworth, ran a candy and homemade ice cream shop.

“The Boston Pops played before the race and during the race,” she told Lake Placid News. “It was amazing.”
She lost the race but joined the local skating club. She also played field hockey, basketball and softball in high school before graduating from Tufts University with a bachelor’s degree in physical therapy science.
Her success at the Olympics did not come as a surprise: She had been winning national indoor and outdoor titles for at least two years. And, in an interview with The Boston Globe after she had made the 1960 Olympic team, she predicted, “I am perfectly confident I haven’t yet reached what is to be my maximum speed.”
Ashworth returned to skate in the 1964 Winter Games in Innsbruck, Austria, and in the 1968 Olympics in Grenoble, France. Her best finish was a fourth-place tie in the 500-meter race in Innsbruck.
When she finished skating, she worked as a high school teacher and speedskating coach and helped her parents run the candy concession at Santa’s Workshop, North Pole, NY, in Wilmington. She was also the town supervisor of Wilmington and a skilled woodworker.
Ms. Ashworth donated her bronze medal to the Lake Placid Olympic Museum. “This is part of the world,” she told The Lowell Sun. “This is what you share.”