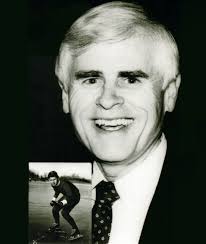 Speedskating runs in the Steele family, as Jerry was encouraged to start skating when he was 9 years old and continued until he was 24. His father and four uncles were all speedskaters and officials. Jerry raced in local, state and national meets from 1941 to 1955 and qualified to skate in the 1951 and 1955 Olympic Trials. Following his skating career, Jerry started coaching – a contribution he’s made to the sport for 29 years. After a two-year stint in the U.S. Army, Jerry began serving as meet director for many local, state and national championships. He became a national Chief Judge in 1984 and was a Chief Referee at the Pre-World Special Olympics in Anchorage, Alaska in 2000. At the 2002 Winter Games in Salt Lake City, Jerry was a corner judge. He has also served as Assistant Chief Referee at two World Cup events. Jerry served as the president of the Wisconsin Speed Skating Association, participated as a member of the Pettit Center Advisory Board and ran the Learn to Speed Skate program at the Pettit National Ice Center for five years. He continues to volunteer as a Learn to Speed Skate instructor and is a member of the Friends of the Pettit Center Board of Directors. He has served on the George Howie Memorial Award Committee as chair, the USS Sports Medicine committee, the USS Long Track Committee and for the past 10 years on the Speed Skating Hall of Fame Committee, serving as chair for two of those years. Speaking about his main speedskating goals, Jerry said, “I want to benefit speedskating from grass roots, to world championships to the Olympic Games.” He was inducted to the National Speedskating Hall of Fame on April 21, 2007 at Milwaukee, Wisconsin.