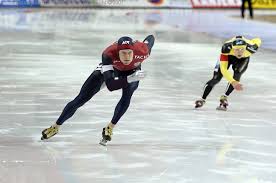 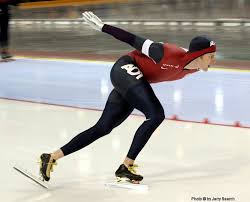 Like many others before him Cheek started skating when he was young. His breakthrough moment came at age 23 when he participated in the 2002 Winter Olympics in Salt Lake City. He won the Bronze medal in the 1,000 meter and fell just short of the podium for the 1,500 meter, missing it by 0.08 seconds.

The next year he won a Bronze medal at the World Single Distance Championships in Berlin, Germany in both the 1,000 and 1,500 meter events. He went to the Olympics again in 2006 and won the Gold medal in the 500 meter and the Silver medal in the 1,000 meter at the Turin Winter Games. After winning his Gold medal in the 500 meter at Turin, Cheek donated his medal bonus to to an organization called Right to Play. Right to Play is an athlete driven international humanitarian organization formed by Olympic champion Johann Olav Koss. After his initial donation Cheek also donated his prize money from his 1,000 meter race. Since Cheek’s donations other athletes have followed suit and contributed nearly $400,000 to the cause. Cheek’s team elected him to carry the U.S. Flag into the closing ceremonies at Turin.

Cheek went on to graduate from Princeton University and has spent his life in philanthropic endeavors as co-founder and President of Team Darfur, an international coalition committed to raising awareness and hoping to end the crisis in Darfur, Sudan.

“In North Carolina, if you can put wheels on it, we’ll race it.” When Joey Cheek is asked how a boy from North Carolina became an Olympic speedskating champion, that’s usually how he’ll begin the story.

When a neighborhood friend introduced Joey and his brother, Michael, to inline speedskating, they were instantly hooked. “It felt like the thing I was put on Earth to do,” Joey has said. And he did it well. Only a year after putting on skates, Joey had earned his first age-group national podium. In the years that followed, he would win multiple junior titles and national records on inline skates.

In 1994, while watching the Lillehammer Olympics from his childhood home in Greensboro, Joey saw Dan Jansen bring home the gold medal. With stars in his eyes, he looked up at his mother and said, “That’s what I want to do next!” She famously replied, “Well, it ain’t gonna happen here.”

Thus Joey’s Olympic journey began. His quest for a gold medal led him from North Carolina to Calgary, Alberta, throughout the Midwest, and then ultimately to the towering Rocky Mountains of Montana and Utah. Over the next 10 years, he climbed the ranks from junior national team to national team and two Olympic teams. In 2002, at the Salt Lake City Games, eight years after watching Dan Jansen claim Olympic gold, Joey won his first-ever international medal – a bronze in the 1,000 meters.

Over the next four years, he went on an international tear, winning more than 25 World Cup and world championships medals, culminating in a performance of a lifetime.  In 2006, he won gold and silver medals at the Olympic Games in Torino, Italy, and became a world sprint champion, joining Americans Eric Heiden and Jansen as the only men to have done so at the time.

His Olympic legacy secure, Joey turned his talents and fame to assisting charitable causes. After winning the gold in Torino, he announced he’d donate his Olympic winnings – totaling $40,000 – to Right to Play, an organization that helps refugees driven from their homes in the Darfur crisis in western Sudan. He then challenged others to donate as well. All total, Joey raised $1.5 million in charitable donations to aid Right to Play.

Later in 2006, Joey co-founded Team Darfur, an international coalition of more than 500 athletes around the globe, to continue to advocate and raise funds for the people from that region. He was selected as the inaugural Heisman Humanitarian Award winner, was named to TIME’S 100 most influential people, the U.S. Speedskating Hall of Fame, and the International Sports Humanitarian Hall of Fame. His image even adorned the cover of the famed Wheaties box.

Since ending his athletics career, Joey has worked as a corporate speaker with dozens of Fortune 500 Companies, started a digital sports content company, and currently serves on the board of the U.S. Olympic Museum and Hall of Fame. Most recently, Cheek completed his first stint as a broadcaster, covering speedskating for NBC at the 2018 Winter Olympics.