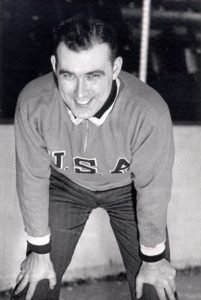 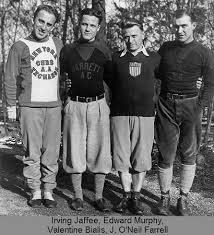 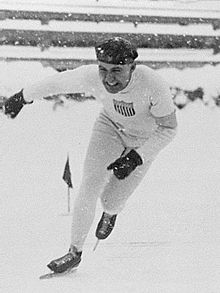 Mr. Farrell was born August 28, 1906. He achieved the title of National Outdoor Champion and, at the 1928 Olympic Games, he won a bronze medal in the 500m in a three way tie for third. Farrell continued to compete and was again selected for the 500m at the 1932 Olympics, where he reached the finals. He returned for his third Olympics in 1936, as the coach of the US Olympic speed skating team. He was inducted to the National Speedskating Hall of Fame on May 16, 1971 in Lake Placid, New York.

Farrell participated in the 1928 Winter Olympics in St. Moritz. On the 500 m, he skated in the first pair and promptly set a new Olympic record with a time of 43.6 seconds, breaking Charles Jewtraw’s old record of 44.0 seconds. The record would not stand, though, because in the next pair, Clas Thunberg skated 43.4 seconds, and in the eighth pair, Bernt Evensenalso skated 43.4. But since nobody else besides those two skated faster than 43.6, Farrell won the bronze medal.

At the 1932 Winter Olympics of Lake Placid, the speed skating events were skated in pack-style format (having all competitors skate at the same time) for the only time in Olympic history. Farrell qualified for the final in his heat, but finished in sixth (and last) place in the final. Two weeks later, he finished fourteenth at the 1932 World Allround Championships, also in Lake Placid. At the 1936 Winter Olympics of Garmisch-Partenkirchen, Farrell was the head coach of the American speed skating team.