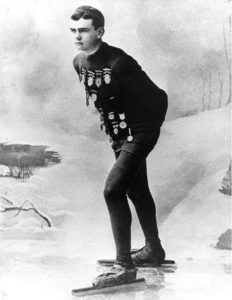 Joseph was born February 11, 1871 and passed away on April 1, 1921. He was inducted into the National Speedskating Hall of Fame on May 14, 1960 in Colorado Springs, Colorado. He was the first American World Champion and reached his peak in 1893. He was known for skating on ice skates with longer irons than did the other skaters, which gave him an advantage because he did not need to swing with his arms.