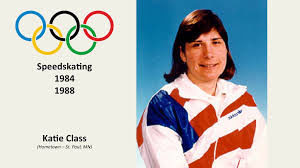 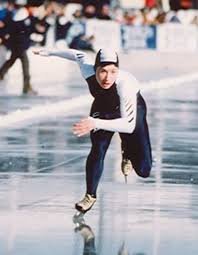 Katie Marquard’s speedskating career was determined by her sister who joined the Midway Speedskating Club because they had better uniforms than the other clubs in the area. Working with long-time club coach Bill Cushman, Katie was the youngest of seven children and the only one to make an Olympic team. During her speedskating career, Katie was on five World Sprint and three World Allround teams, and was a five-time World Cup individual medalist. At the 1987 World Championships, she won the bronze medal in the 500m and third overall in the 1500m World Cup rankings in 1986 and 1987.

Her skating earned her a spot on two Olympic teams: Sarajevo, Yugoslavia in 1984 and Calgary, Canada in 1988 where she competed in the 500m, 1000m and 1500m. In Sarajevo, Katie recalls the athlete village was patrolled by security guards with machine guns, while in Calgary, everything was open and innovative. “The Calgary Oval was brand-new and it was speedskating heaven. Back then, it was the fastest ice in the world.”

After the 1988 Olympics, Katie retired from competition, graduated from the University of Minnesota and started looking for a full-time job. Cushman, serving as US Speedskating president, persuaded Katie to apply for the USS executive director position. She was hired for the position and for a long time USS was a one-woman show. Operating out of the U.S. Ski offices in Park City, Utah, for two years, Katie created the basis for the USS organization. After relocating to Ohio, Katie led USS for 16 years through a merger with the Amateur Speedskating Union and five Olympic Games.