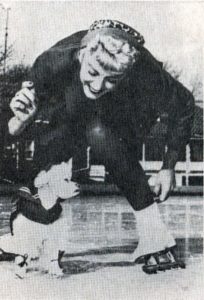 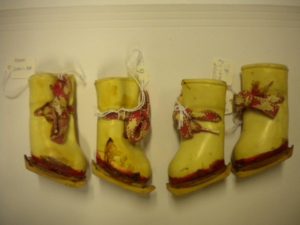 Kit was born on March 28, 1910. She finished first in the 1500m and third in the 500m events at the 1932 Winter Olympics in Lake Placid, although at the time, women’s speedskating was solely a demonstration sport. At the Unofficial World Allaround Championships in Oslo, Norway in 1935, she competed in the 1000m event, taking home gold, and won the bronze in the overall. At the first official World Allaround Speed Skating Championships for Women in Stockholm in 1936, she walked away with the gold. She was inducted into the National Speedskating Hall of Fame on May 16, 1964 in Lake Placid, New York.

Kit Klein started skating in her hometown of Buffalo, New York and won her first competition on a pair of handed down hockey skates. From there her career blossomed. After preforming marvelously in local races, Kit moved on to the American National races, winning gold in multiple North American Championships as well as racing in the Olympics while women’s skating was still a demonstration event. Kit’s greatest success came in Stockholm during the All-Around World Championships, where she won gold.
Kit retired after her success in Stockholm, throwing her skates into the Atlantic Ocean during the voyage back to the U.S. Soon thereafter, she married Dr. Thomas Outland and settled in Pennsylvania. Always active in the sport, Kit sponsored and tutored many skaters, as well as preforming with a traveling ice show. A lifelong skater, Kit was a great pioneer and champion of the sport.

Amateur Speedskating Union archives:
“During her life, Klein had given many free skating
clinics to young people, performed charitable works in
elementary and high schools, Crippled Children’s
Hospitals and Homes for the aged, donated trophies
for girl’s competitions in Buffalo, held impromptu
clinics whenever needed and always encouraged
young people to skate. She took part in many
Olympic fundraising benefits. Kit Klein was honored
posthumously with the 20th century Women’s Athletic
Award, and was elected to the Women’s sports hall of
fame and the Speed Skating hall of fame.”

Kit Klein was born in Buffalo, New York and started competing on the local level. Later, Klein finished first in the 1500 metres event and third in the 500 metres competition at the 1932 Winter Olympics of Lake Placid, where speed skating for women was a demonstration sport. She also participated in the 1000 metres event but was eliminated in the heats.

After the 1936 Winter Olympics, Klein toured Europe before sailing home. During the voyage home Klein actually threw her skates overboard to mark her retirement from competitive skating. Towards the end 1936, she married Dr. Thomas “Tom” Outland of Sayre, Pennsylvania and the couple settled down in Harrisburg, Pennsylvania. For a while, Klein toured around North America with the Ice Follies skating show. During her act, her dog Fluff Puff would scoot around on the ice wearing tiny ice skates. Following her husband’s retirement in 1967, they moved to Holmes Beach, Florida, where Catherine “Kit” Klein-Outland died in 1985 at the age of 75.