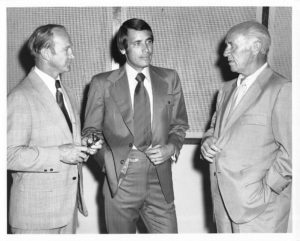 Lamar was born September 10, 1912. He was an outstanding indoor skater, served as a national official, World and Olympic team coach, and was an officer and technical force in both pack style and Olympic speed skating since 1930. Before his passing, he held the position as chairman of the speedskating committee of the United States Olympic Committee. Lamar was inducted to the National Speedskating Hall of Fame on May 24, 1970 in Buffalo, New York.

WEBSTER GROVES, Mo., Sept. 7 (AP)—Lamar Ottsen, chairman of the speed‐skating committee of the United States Olympic Committee, died Friday, apparently of a heart attack, at O’Hare Airport in Chicago. He was 62 years old.

Mr. Ottsen had been making arrangements for United States skaters for the 1976 Winter Games in Innsbruck, Austria. He had been an official for the United States in Olympic speedskating since 1952.

Mr. Ottsen leaves his wife, a son and a daughter.