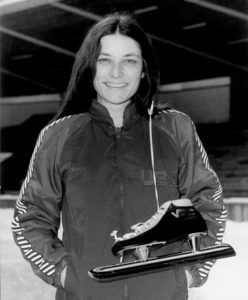 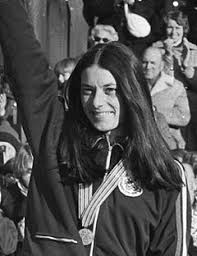 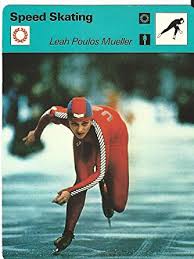 Leah was born October 5, 1951. She was the top competitor in pack style skating for eighteen years, winning a silver medal at the 1000m in the 1976 Olympics in Innsbruck, Austria, the World Sprint Championship in 1974 and 1979, and silver medals at 500m and 1000m at the 1980 Lake Placid Olympic Games. Throughout her career she won thirty medals in World competitions. Leah was inducted to the National Speedskating Hall of Fame on May 13, 1988 in Arden Hills, Minnesota.

(Leah Poulos-Mueller’s) father, Sam, is the manager of the Northbrook Speed Skating Club where Leah, and Anne Henning and Shelia Young, learned the sport. He still sharpens his daughter’s skates, though it took him three days to get the proper accreditation here to do so. “I threw some language around,” he said. “All I wanted to do was be able to take care of my kid’s skates.”

But Poulos says he never pushed his daughter. “My kids would have told me where to go,” he said. “I’ve seen parents bawl a kid out, “Why the hell didn’t you do better?’

“And I’ve seen kids hold a club over the parent’s head, ‘If you don’t do this, I’ll quit,’ where it was more important to the parent than the kid.

“All I ever asked was that they do the best they could and satisfy themselves.”

Leah’s mother Nelda, who describes herself as “just a mom, just like your mom, I’m there,” says, “it takes a lot of dedication, a lot of patience on the parents’ part. In the U.S., there’s only one rink. My husband drove to West Allis six times a week so that Leah could get ice time, 75 miles each way.”

Her daughter says it is not easy to be a speed-skating parent. “Whether you start out rich or not, you end up poor. You go without a new car, new furniture, there’s a lot of sacrifices you have to make.”

And does she feel guilty about asking her parents to make that sacrifice? “Yeah, sure,” she said, “every time I look at that piece of junk my dad drives around and calls a car.”

Still? “I don’t know that you ever get over a feeling like that,” she said.