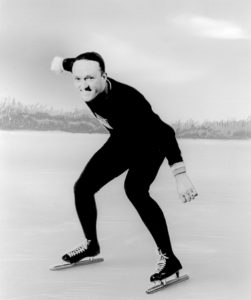 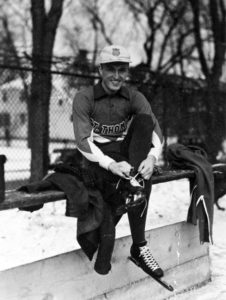 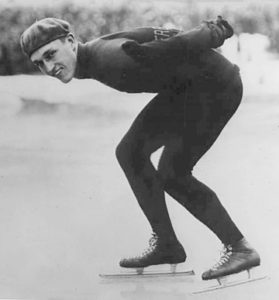 Leo was born February 7, 1916. During his skating career he became National and North American Outdoor Champion. He won the bronze medal in the 500m in the 1936 Olympics in Garmisch-Partenkirchen, Germany at the tender age of 19.

Leo attended the College of St. Thomas from 1937 – 1938.  Prior to enrolling at St. Thomas he won a bronze medal in the 500m race at the 1936 Winter Olympic games.  He continued to compete in national and international speed skating events after that, wearing the St. Thomas colors in the 1938 International Speed Skating Championships in Oslo, Norway.

In 1937 and 1938, he was the U.S. National Indoor champion and in 1940 he also won the titles of National and North American Outdoor champion. Leo placed on the Olympic team for the 1940 Olympic Games but these games were unfortunately never held.

In 1964, he became the coach of the U.S. Speedskating National Team. He was inducted into the National Speedskating Hall of Fame on May 18, 1968 in St. Louis, Missouri.

Leonhard “Leo” Freisinger (February 7, 1916 – August 29, 1985) was an American speed skater who competed at the 1936 Winter Olympics. He won a bronze medal in the 500 m and placed fourth in the 1500 m event. He won the U.S. National Indoor title in 1937 and 1938 and the National and North American Outdoor title in 1940. In 1938 he set a world record over 500 m at a meet in Davos, Switzerland, but Hans Engnestangen beat this record a few minutes later. Freisinger was selected for the 1940 Olympics, but they were canceled due to World War II. Later he became a figure skater in professional ice shows, and coached the 1964 American Olympic speed skating team

Freisinger, 69, died early Thursday morning at Mission Community Hospital despite attempts by hospital personnel, and earlier by paramedics, to revive him, said his wife of 45 years, May Freisinger.

A bronze-medal winner in 500-meter speed skating during the 1936 Olympic winter games at Garmisch-Partenkirchen, Germany, Freisinger remained active throughout his life and recently joined a bicycle club in Mission Viejo. His death came as a shock to his family.

‘Such a Good Athlete’

“He was in such good health. He was such a good athlete. He felt perfectly fine and had a physical about a week before (his death),” Mrs. Freisinger said.

Through the years, the Chicago native won six U.S. National Championships and three North American Championships. In 1938, he established the world record for 500-meter speed skating at 41.9 seconds–a record that was not broken for 18 years.

Between 1947 and 1954, Freisinger, along with his wife and young daughter, skated with Holiday on Ice.

An “all-around athlete,” Freisinger played baseball, among other sports, and was head speed-skating coach during the 1964 IX Winter Olympic Games in Innsbruck, Austria.

When the Olympics came to California last year, Freisinger, a California resident for the past 30 years, joined in the activities through various functions for former Olympians. “So he got to do that one last time before his time was up. And that was nice,” Mrs. Freisinger said.

The day he died, Freisinger and his wife were scheduled to attend a Los Angeles Olympic Organizing Committee ceremony, featuring dignitaries such as Los Angeles Mayor Tom Bradley. Freisinger had donated trophies to a number of athletic foundations, including several now in the possession of the LAOOC, his widow said.

Freisinger was buried Saturday at O’Connor Laguna Hills Mortuary. He is survived by his wife, his daughter, Joan Trompetto, two grandchildren, Brent and Tracy, and two sisters, Eleanor Roncketti and Kathryn Davis.