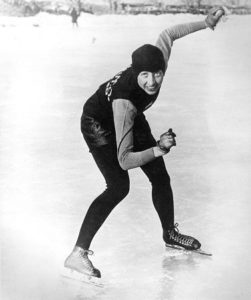 Loretta was born February 11, 1908. She passed away on August 21, 2007, in Venice, Florida at the age of 99. During her life, she became a National Outdoor and Indoor Champion with her peak primarily occurring in 1930. She was inducted to the National Speedskating Hall of Fame on May 18, 1968 in St. Louis, Missouri.

From Minneapolisparkhistory.com:
In 1926 the Minneapolis Daily Star began promoting a Silver Skates Derby, a series of races for local boys and girls that gave them a chance to win a pair of high-quality racing skates. Silver Skates races—named for Mary Mapes Dodge’s 1865 novel, Hans Brinker, or the Silver Skates—had already become popular in New York and Chicago and they helped promote skating in general, but especially for girls who were given equal billing and prizes as boys. Preliminary races for boys and girls were held at playgrounds throughout the city with the finals at Lake of the Isles where the top finishers were awarded skates and other prizes.

The Silver Skates Derby also featured open races for adults, without the prize of skates. In the first Silver Skates Derby Amy Ostgard won the senior women’s title followed by Mildred Bjork and Violet Evans in front of a crowd estimated at 20,000. Bjork became the dominant woman skater in Minneapolis for the next few years, winning the 1927 Silver Skates title and the 1928 Minnesota championship. She was one of four skaters sent by Minneapolis to the national amateur championships in Detroit in 1928, but she did not place.

When the 1929 national championships came to Lake of the Isles, Bjork must have had high expectations on her home ice and she skated well on her way to a third-place finish. She was completely overshadowed, however, by Detroit skater Loretta Neitzel who stole the show that weekend by setting three new world records in the mile, quarter-mile and sixth-mile distances.