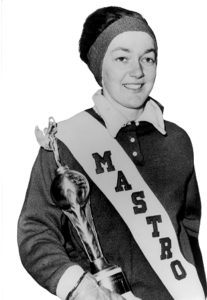 Lorraine was born 1927 and passed away in 1966. She was a two time National Outdoor and North American Indoor Champion and in fact, was the first woman to win both championships two years straight! In 1949, she set four North American Indoor records. Lorraine also served as an officer of the Michigan Skating Association. She was inducted to the National Speedskating Hall of Fame on May 15, 1982 in Bloomington, Minnesota.