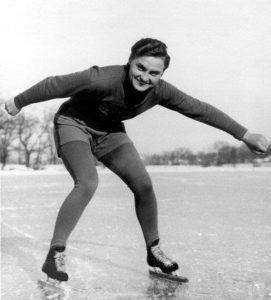 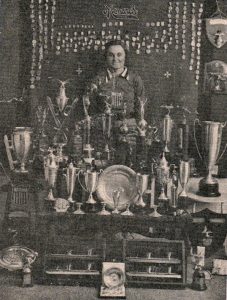 Maddy was born June 10, 1911. During her life, she became a National Outdoor and Indoor Champion, as well as a North American Outdoor and Indoor Champion. She won the national indoor and outdoor all around championship four times each. Her peak year was primarily 1939. She was inducted into the National Speedskating Hall of Fame on May 14, 1966 in Colorado Springs, Colorado. 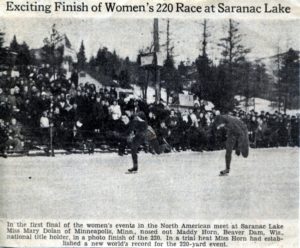 BEAVER DAM, Wis., July 5 (AP)—Madeline Horn, who won more than 300 medals and scores of trophies in speed skating competition in the United States, Canada and Europe, died Friday. Miss Horn, who was 61 years old, won the North American championship in 1933.  Miss Horn dominated women’s speed skating in this country in the late 1930’s. She retired in 1940—the year the Olympics could not be held because of World War II—after having successfully defended her women’s senior North American and national outdoor titles. It was noted at that time that she had won more than 60 races and lost fewer than 5 during her career in top‐flight racing. At the world’s championships in Oslo in 1938 she won the 500‐meter title with a time of 51.7 seconds.

From the Beaver Dam Unified School District Hall of Fame
Madeline “Maddy” Horn – 1998 Outstanding Alumnus
Maddy Horn is a 1934 High School graduate and an internationally acclaimed speed skater. She competed in Canada, the United States, and Europe. In 1937, she held seven out of ten world records in women’s skating. In 1938, she won second place in the World Championships in Oslo, Norway. Horn was the only woman speed skater chosen to represent the United States in the 1940 Olympics. Unfortunately, the games were canceled when the United States entered World War II. In her last sixty-seven races, Horn won sixty-four first place medals. To this day (at the time of publication-ed), she owns the world record in the 220-yard sprint.