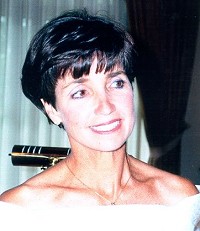 Mary was born February 11, 1945 and passed away on February 18, 2013. She started skating at the age of ten. Since then she trained and pushed hard to achieve the titles of National Indoor Senior Champion in 1968 and 1981, the North American Indoor Senior Champion in 1969, and she established four National records as a Senior. When Mary stopped skating, she continued to stay active in the sport as a coach of the 1978 and 1979 World Short Track Team and as a National Coach. She was inducted to the National Speedskating Hall of Fame on May 17, 1998 in Wausau, Wisconsin.

Obituary
Mary Margaret Blair Polaski, 68, of Colorado Springs, CO (Feb. 11, 1945), lost her battle with Leukemia (CMML) March 18, 2013. She was surrounded by her loving husband, Kenny and their children Ken Jr. (Christelle), Diana, Scott (Koby), Nic, and grandchildren Brenden, Joey, Jenna and Anna. She is also survived by her sisters Suzy (Jay), Angela (Randy), Bonnie (Dave); nieces Christine, Blair, and nephews Nathan, Garrett, and Grant. She is preceded in death by her parents, Eleanor & Charles, and brothers Chuck and Rob. She graduated from the University of Illinois in 1966 where she was a member of the Kappa Kappa Gamma sorority. Mary was very involved in the Colorado Springs sporting community. She was the coach of high school swimming, tennis, the Broadmoor Speed Skating Club, 2 World speed skating teams, and was the state high school hockey commissioner. She participated in bridge clubs and was an avid runner, cyclist and golfer. Beyond her many awards and accomplishments, including 5 National Speed Skating Championships, she was also inducted into the US Speed Skating Hall of Fame in 1998, and received the Col. F. Don Miller Award for Sports Service in 1999. Funeral services will be held at Divine Redeemer on Friday March 22nd at 2 PM located at 927 North Logan Ave., Colorado Springs, with a reception from 4-6 at Antlers Hotel, 4 S. Cascade Ave., Colorado Springs. In lieu of flowers donations may be made to The Leukemia & Lymphoma Society Attn: Polaski Pedaler, 200 S Executive Dr. Suite 203 Brookfield, WI or visit wi.2013ss150.llsevent.org/polaskipedalers