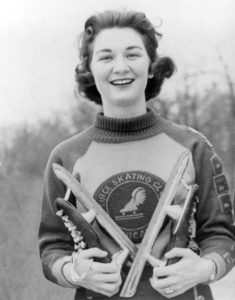 Inducted May 14, 1972
Mary was born on February 17, 1939. She won the title of National and North American Outdoor and Indoor Champion eighteen times as well as setting seven National outdoor and indoor records. She organized and coached several new skating clubs to promote the sport. Mary also co-authored promotional literature and was the first skater to win the National Outdoor Championship in all classes, Midget through Senior. She was elected to the National Speedskating Hall of Fame on May 14, 1972 in Colorado Springs, Colorado.

From an article Published by loomishchafee.org

A seven‐time national champion speed skater, Mary was a professor of medical microbiology at the University of Wisconsin, coached the Wisconsin men’s hockey team on speed skating, helped to coach Olympians Beth and Eric Heiden, and was featured on the cover of Sports Illustrated magazine. Mary was elected to the Speed Skating Hall of Fame in 1972.
Here on the Island, Mary is more often known as a hard‐working but unassuming music teacher who is the wife of music teacher Bill Sand. I quickly learned what I felt was a remarkable story of dedication and passion as well as a testament to the extraordinary courage an athletes must undertake to commit to their goals and blaze a path for others to follow while being true to themselves:
Mary competed in speed skating from 1951 to 1960 and then came out of ‘retirement’ for a short period in the mid ’60s, after she was married and she and her husband had their 1st son. Mary won 18 national and North American (international) championships, both indoor (now called short track) and outdoor (now called long track), from 1951 to 1960. Mary was the first alternate to the 1960 Olympic team. As a 17 year old, she was
featured in Sports Illustrated with a full‐page picture in her skating uniform as well as a two‐page article and additional pictures.
Nineteen sixty was the first time women were allowed in speed skating in the Olympics. At the time, Mary was 19 years old and a junior at Northwestern and studying hard for her MCAT’s [medical school entrance exams]. All the other women had dropped out of school to train for the Olympics. The 1960 team of women consisted of four skaters; none of them had beaten her in the [previous] two years, and her studying versus training told the tale!
As a 20‐year old senior at NU, Mary won the national outdoor and the national indoor championships in 1960. Mary was primarily a sprinter, but won all four distances in each of those two competitions.
From 1964 to 1967, Mary and her husband Bill lived in Madison, Wisconsin, where he was completing his doctorate in music/French Horn. Mary was on the faculty of the University of Wisconsin Medical School, where she taught medical microbiology to second‐year medical students. (Mary received the “Golden Apple” award during her second year of teaching.) During this time, Mary taught power skating to the University of Wisconsin men’s hockey team, who practiced from 5 to 7 a.m. at an indoor rink in Madison. It was a busy time for Mary, her husband, Bill, and their son Dave, who was 2
years old.
It was in Madison that Mary began coaching the two Heiden children, Beth and Eric. In 1964, Mary was certified as an Olympic coach. Her family moved to Connecticut in 1967 when Bill took a university position, but the family summered in Madison and kept in constant contact with the Heidens — Jack and Nancy Heiden and Bill and Mary remained close friends. At the 1980 Olympics, Mary and her husband Bill worked as chief ushers for the hockey games and the figure skating. Their two sons, then 17 and 12, worked on the speed skating oval, and we were all outfitted with both indoor and outdoor Olympic
uniforms! Though Mary wasn’t officially coaching the Heidens at that time, they saw and talked to each other a number of times. In Mary’s words, “It was an experience I will never forget. It was a wonderful time in my life, and I have so many great memories.” Mary noted that her husband Bill became an expert on sharpening her skates. Both of their boys also competed in speed skating. Dave made the semifinals for the 1980 Olympic team, and John competed in the final round for the 1984 team. Neither made the
final team, but Dave set a national record in the 1500‐meter distance, and John was a national indoor champion in 1981.”