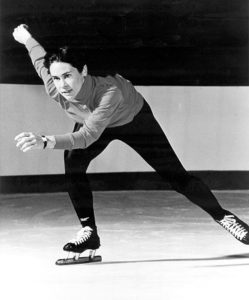 Michel was born August 28, 1951. She won six National and North American Championships in the senior division while setting four records. In 1974, she won the North American Indoor while also setting records in the 400 and 800 meter events. She concluded her championship career by winning the National Indoors in Champaign in 1975 and set a record at 3/4 miles. She was inducted to the National Speedskating Hall of Fame on May 15, 1987 in Southgate, Michigan.