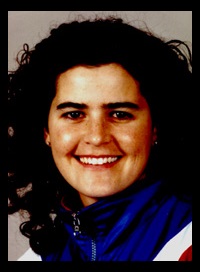 Moira started skating as a Midget and went all the way up through the ranks to skating as a Senior Woman. At the time, she was one of only two other skaters to have achieved this.

She made her first Senior World Team as a short track skater at the age of 14. She is also one of the few skaters to have made Olympic Teams both in Short Track and Long Track. As a young athlete she inspired the other skaters as they witnessed her dedication, training, work ethic, assistance, and accomplishments to make their way onto National, World, and Olympic teams.

Moira made her Olympic debut in 1988, and was a member of four consecutive Olympic Teams including the 1998 Winter Olympic Games in Nagano, Japan, where she placed 9th in the 1000m. D’Andrea Marshall is one of very few skaters to have made Olympic Teams in both Short Track and Long Track. Throughout her long and prestigious athletic career, she was a member of eighteen Senior World Championship Teams, five World Sprint Teams, three World Single Distance Championship Teams and three World Short Track Teams.

Moira’s love of the sport led her to pursue a career in coaching which resulted in her moving to Canada, where she could attend the National Coaching Institute in Calgary, where she attained an Advanced Coaching Diploma in High Performance Coaching in Speed Skating. She has gone on to be a very successful coach and program director; she was the Female Coach of the Year for Speed Skating Canada, Long Track Coach for the 2002 Canadian Olympic Team, and has been a recipient of the Petro Canada Coaching Excellence Award. She was inducted into the National Speedskating Hall of Fame on May 16, 2015 in Minneapolis, MN.