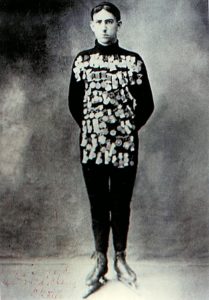 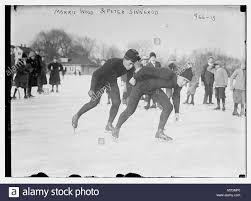 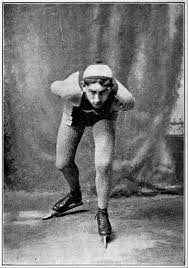 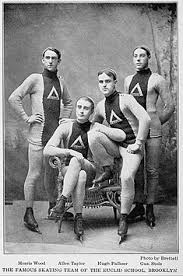 Morris was born on January 28, 1882 and died May 17, 1967. Wood was a dominate force in the world of speed skating. He was the world amateur champion from 1902-1907. At one point, he held all the speed records from fifty yards to five miles. He would race very often and was known to have won hundreds of races. In February of 1904, he set a speed skating record for the indoor mile that would last for well over 50 years at a time of 2:41.02. Wood was known for more than just his speed. He was a showman who would often jump 6 or more barrels at a time.

One of the most amazing races Mr. Wood participated in was staged on Branchport Creek when, in January of 1931, he raced against a horse, a trotter named Don E. before a crowd of 7,000 lining the river bank. During the trial races the speedskater won. But the ice softened, and when the race was finally run, “He just me by a head,” Mr. Wood said later. Mr. Wood had suffered a back injury 13 years before and it may have been the cause of his defeat.

He was inducted into the National Speedskating Hall of Fame on May 19, 1962 in Colorado Springs, Colorado.

Buried somewhere in our 150+ box archives, we are supposed to have a video of 50 year old Mott racing a horse named Don E. The horse won, but only by a nose. We hope to transfer the video to digital format and add it here.