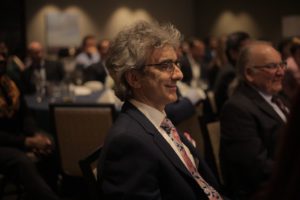 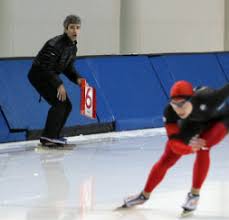 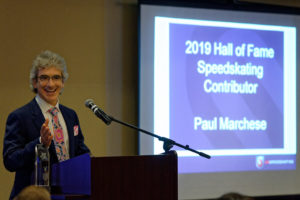 In 1988, Paul started the formal development of the Marchese skating boot. Paul’s design was innovative and completely changed how skating boots would be made. Paul’s boots were made of custom leather and fiberglass and had a detachable runner. At that time, this method was state of the art in the speedskating industry. The custom skate allowed skaters to truly feel comfort/control and speed.  Currently, there are at least 130 Olympic medals won on Marchese skates. There are over 1000 World medals won on Paul’s skates.

Paul’s passion for the sport and creative efforts brought to our US athletes what at the time did not exist.  He provided to the skater’s pieces that were missing in his time of skating. He has worked his whole skating life to provide something to coaching and in his product that as evidence by the success of the skaters enhanced the sport.

Paul coached Olympians Trevor Marsicano & Jonathon Kuck (both silver medal winners) along with many other international and national skaters.

Even after retiring as the head coach with the Saratoga Winter Club, Paul will continue designing boots/blades for skaters all around the world. He continues skating and cycling one of his other passions.

Below are quotes from some of the skaters that Paul has worked over his career.

“Paul is the only person I know that actually loves the sport so much that he’s in it 24/7” He’s passionate about it. He’ll help anyone out. He’s a great coach and mentor, but I feel like he can just put everything on a small plate and he will be super happy with life”.  – Jennifer Kirsh- National level skater and 2018 Master World Champion

“I learned from him how to train mentally & physically. His best lessons were how to deal & adjust to the turbulent world of speedskating & how to prepare mentally for competitions”. – Matt Rittenhouse – National Level Long Track skater