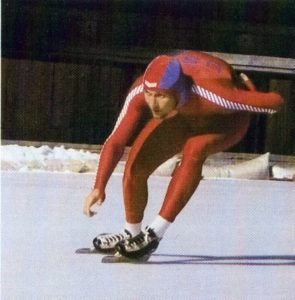 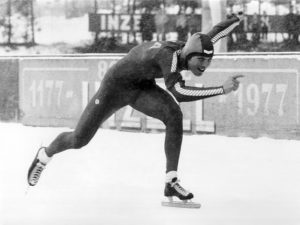 Peter was born July 27, 1954. During his career, he was an accomplished pack style skater, both indoor and outdoor. He won the gold medal at the 1000m and set an Olympic record at the 1976 Games at Innsbruck, Austria. This was the first medal ever won at any event other than 500m since the creation of the Winter Games, except for the pack style competition at the Lake Placid Games in 1932. Peter was inducted to the National Speedskating Hall of Fame on May 13, 1988 in Arden Hills, Minnesota. 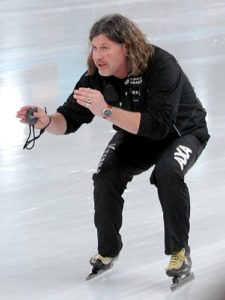 Peter Mueller was the first Olympic Champion on the 1,000 m, when this distance was introduced at the 1976 Winter Olympics in Innsbruck. More international successes followed at the World Sprint Championships, where he won bronze in 1976 and silver in 1977. His last appearance as a speed skater was at the 1980 Winter Olympics in Lake Placid, where he placed 5th in the 1,000 m, 1.93 seconds behind the winning time of Eric Heiden.

Compiled from other sources:

Peter went on to coach the US team, then moved on to work with skaters in France, Austria, Holland, and Norway.

“Maybe (Mueller’s) most important tool is that he is able to bring out the best in each and everyone. I don’t just mean the best in physical achievements, but I also mean the best attitude to life,” national Norwegian team skater Mikhael Flygind Larsen said in 2006.

Mueller says he was told by his early Dutch coach Peter Schotting that he stood no chance in winning the 1,000 gold medal at the 1976 Innsbruck Games.
“I thought, I will show you I have no chance.’ That is the Olympics that I won,” he said. He was so bitter, he didn’t even feel joy when he got gold.
The lesson still serves him as a coach.

Mueller coached Bonnie Blair, who won two sprint gold medals at the 1992 Albertville Olympics, and Dan Jansen who took 1,000 gold in Lillehammer in 1994. He briefly coached the U.S. cycling team Shaklee before returning to skating with the French team in 1995.

While he was with the Dutch team, he coached Marianne Timmer who won two golds in Nagano in 1998. He wrote his Dutch-language autobiography, calling it “Op Dun Ijs — On Thin Ice.”