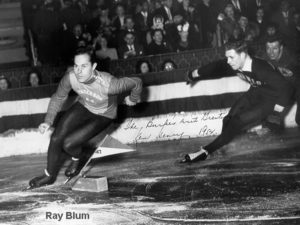 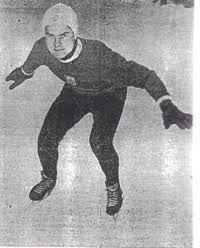 Ray was born April 11, 1919. During his lifetime he became a National and North American Outdoor and Indoor Champion, with his peak year being in 1952. He was inducted in to the National Speedskating Hall of Fame on May 17, 1969 in Anaheim, California.

Raymond Edward “Ray” Blum (April 11, 1919 – May 5, 2010) was an American speed skater who competed at the 1948 Winter Olympics in St. Moritz. He placed 20th in the Men’s 1500 meters competition in a field of 45 and 17th in the Men’s 5000 meters event in a field of 40. He was born in Nutley, New Jersey and was a member of the Paterson Skating Club. He attended the Newark College of Engineering at the New Jersey Institute of Technology and earned a Bachelor’s degree from the institution in 1950, after a stint in the United States Navy during World War II. He spent his later life working as an aerospace engineer for several companies in New England and California. On October 26, 1996, he was inducted into the NJIT Highlanders’ Hall of Fame for his success as both a cyclist and a speed skater, as well as the American National Speedskating Museum and Hall of Fame on May 17, 1969. He died on May 5, 2010 in New Jersey.

Ray Blum competed for the Paterson Skating Club, but excelled in both speed skating and cycling. He began cycling at the Nutley Velodrome, where he trained prior to being drafted and transferred to the Great Lakes Naval Station. After serving in World War II, Blum attended the Newark College of Engineering at the New Jersey Institute of Technology (NJIT), graduating with an engineering degree in 1950. But he continued to compete in both sports, winning the US Cycling Omnium Championship in 1949, and in speed skating, he tied for first at the 1950 North American outdoor championships and 1952 North American indoor championship. He is a member of the NJIT Highlanders’ Hall of Fame and the US Speedskating Hall of Fame.

Blum and his wife later settled in Downey, California where he continued to ride bikes and race some into his 70s. He gets honorable mention in the Complete Idiot’s Guide to Cycling, where is credited with helping cyclists get into bike racing and built wheels that were prized.